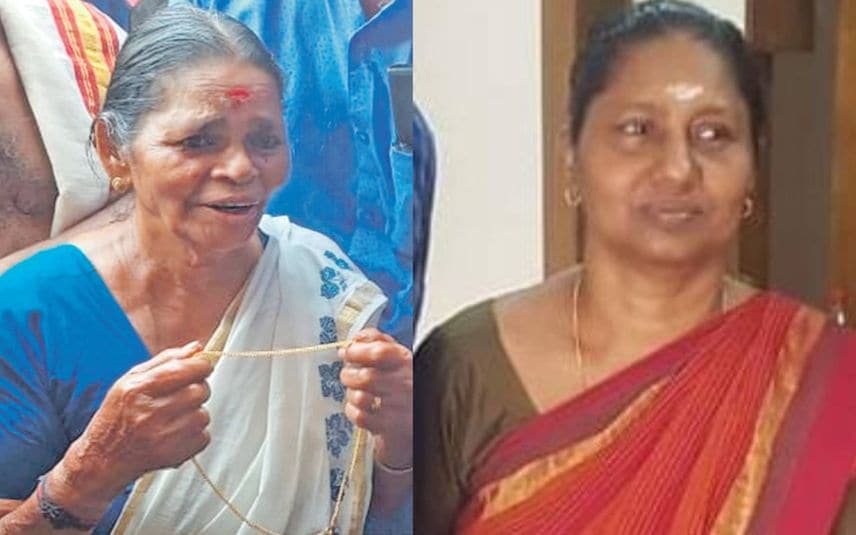 Pathanapuram: The identity of the woman who won the hearts of all by gifting gold bangles to a strange woman at a temple finally revealed. Cherthala native Sreelatha is the one who made headlines with her generous act. She voluntarily came forward to help a woman who was left in shock after finding that her gold chain was missing. The incident took place during the Thiruvathira festival at Pattazhi Devi temple on Saturday.

Sreelatha had reached the temple with her relatives from her husband’s ancestral house on Saturday. She happened to hear the wailing of Subhadra who lost her 2 sovereign chain from the temple. Subhadra had desperately broken into tears when she found that her chain was missing. She was a cashew nut worker and had bought the chain with her year-long savings.

By seeing Subhadra, Sreelatha approached and consoled her. The latter gave two bangles to Subhadra and told her to sell those bangles for buying a chain and advised her to dedicate a ‘pottu’ of gold to the deity. Later she left for her house in Cherthala on Monday morning.

The CCTV at the temple recorded these visuals. Though the temple staff and committee members searched for Sreelatha, they could not find her. When the CCTV footage circulated on social media, Sreelatha directed her relatives not to disclose her identity. However, it was some of her close relatives who admitted that the woman in the visuals is Sreelatha.

Meanwhile, Subhadra who reached the temple on Monday dedicated a ‘pottu’ of gold to the deity as per the advice of Sreelatha and wore the new chain at the temple.

Kottiyoor: A pilgrimage to nature's core