Woman climbs mobile tower in suicide bid, jumps down due to wasp attack 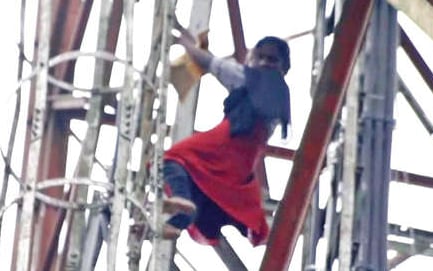 Woman who climbed atop mobile tower

Alappuzha: In a dramatic incident, a woman who climbed atop a mobile tower, threatened to kill herself by jumping off the tower in Kayamkulam. However, the fire force personnel managed to rescue her after a swam of wasp attacked her and she jumped over the net spread out by them.

The incident happened at the BSNL office in Kayamkulam around 5 pm on Monday. A 23-year-old Tamil Nadu native arrived at the office and sought permission to use toilet. The woman who went upstairs was seen climbing on the tower when the staff was leaving the office in the evening. She was carrying a bottle of petrol and lighter too.

After reaching top of the tower, she announced that she would commit suicide as her husband had taken away her only child. The BSNL staff immediately called police and Fire Force. Meanwhile, a wasp nest on the tower got disturbed and a swarm of wasps enveloped the lady. Being stung by wasps, she attempted to dismount from the tower and later jumped over the net spread out by the Fire and Safety officials. The onlookers left the spot following the wasp attack.

Police admitted the woman to the Taluk hospital and ensured emergency treatment for her. A copy of the complaint given to the Malappuram district police chief also recovered from the woman.

The woman from Villupuram in Tamil Nadu has been living with her friend in Charummoodu. Her husband reportedly assaulted her and took away her three and half-year-old child from her sister’s house on April 13. In the complaint, she pointed out that her husband is an alcoholic and hence, the child is not safe under his custody.

Woman living alone found dead at her residence in Alappuzha