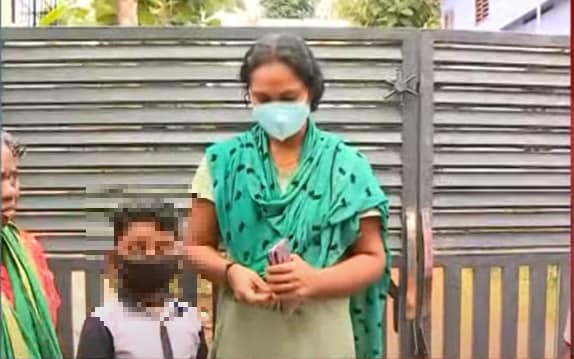 Kollam: A woman and her five-year-old son, who were allegedly kicked out of the house by their in-laws, had to wait for over 17 hours outside. Kottiyam native Athulya and her son had to face the inhumane act from her in-laws on Thursday night.

Athulya said that her mother-in-law locked the gate and did not allow her to enter the house when she returned with her son from school. Her in-laws refused to open the gate and the child could not even change his uniform. It was the neighbours who offered him food, said Athulya. She alleged that her in-laws used to harass her in the name of dowry and had attempted to kick her out from house even before, Athulya said.

After standing six and a half hours outside the gate, Athulya and her son managed to enter the compound of the house with the help of neighbours. However, her in-laws refused to open the door. The mother and child had to spend the whole night in the sit-out without food. The in-laws even disconnected power to trouble the duo. Though Athulya sought the help of police, they were reluctant to help initially. The police even lathicharged the locals who assembled in front of the house, said the natives.

Police helped Athulya enter the house when the protests intensified and the Child Welfare Committee chairman intervened. Police will soon shift the mother-in-law to another house situated in the same compound.

Clash in Kollam over ownership of temple land; two injured

No, bars or Bevco outlets won’t remain open beyond regular time for New ...