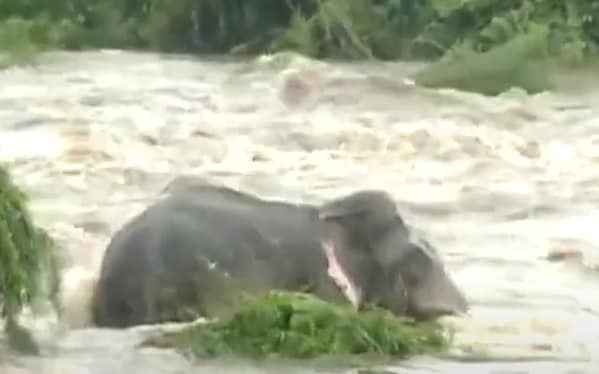 ​​​​​​Thrissur: After nearly three hours of spirited fight, a wild elephant, caught in the flooded Chalakudy river in Kerala, managed to wade to safety on Tuesday.

With the river in spate and none from the Forest team able to reach anywhere near the wild elephant, all the officials could do was to watch it putting up a tough fight.

According to locals, the elephant had been swept away close to 2 kms in the river and then launched a counter operation and using its trunk to locate rocks on the base. After struggling for close to three hours, it finally managed to re-enter the forest.

Forest officials had a difficult time clearing a large crowd that had gathered to watch the elephant caught in the fast flowing waters.

However, not everybody was happy with his victory. Angry local residents who have been tormented by these wild elephants which cause huge damage to their farm land was hoping that the water take away the wild elephant.

"If this is taken away by the waters, we will be saved as there will be one wild elephant less attacking us. The officials have been unable to do anything to save us from these wild elephants," said an angry local.