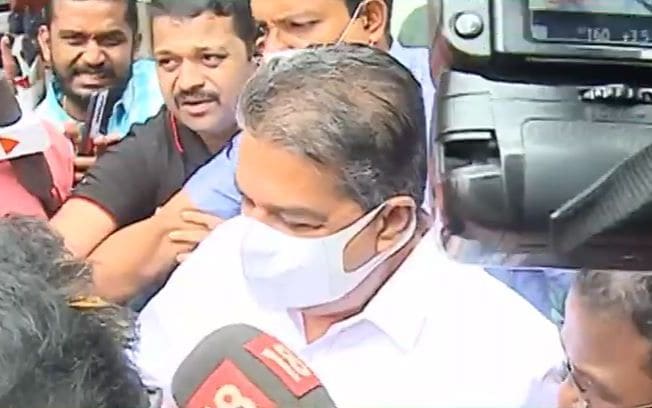 Thiruvananthapuram: Amid mounting pressure, Kerala minister Saji Cheriyan responded to mediapersons' query on his resignation after the meeting at AKG Centre on Wednesday. He asked “what is the issue and why should I resign?” He maintained that he has no plans to resign as of now.

The available PB met at the AKG centre along with CM Pinarayi Vijayan and CPM state secretary Kodiyeri Balakrishnan to take stock of the situation.

Emerging from the meeting, Cheriyan responded to questions on whether he would be resigning with a query of his own -- "why?"
".. What is the problem? I already said what I had to say yesterday," he said in response to repeated queries by reporters outside the party headquarters on whether he would resign or if his resignation has been sought.

It is learnt that almost all LDF allies except CPM are against Cheriyan’s remarks. According to sources, the representatives of the allies maintained that the decision is temporary and is subjected to change. Similarly, reports said that CPM central leadership is not happy with Cheriyan’s statement. Amid this, the CPM area committee, under which the controversial speech happened, has come up with an allegation that his speech was circulated to mediapersons by those having links with the party itself. Those spearheading factionalism are the ones who leaked the video, it said.

Earlier in the day, the Kerala Legislative Assembly session was adjourned for the day after the Congress-led UDF opposition staged protests in the House demanding resignation of Cheriyan.

Later the opposition members protested on the steps of the House and thereafter, near the statue of Dr B R Ambedkar inside the gates of the assembly.

Then the protesting opposition members moved outside the gates of the assembly and told reporters that the ruling front and the CM were avoiding questions being raised by the UDF against Cheriyan.

Targeting Cheriyan for his remarks, Leader of Opposition in the state assembly V D Satheesan said they were not only an insult to the Constitution and the country, but also to Dr B R Ambedkar who headed the committee which drafted the Constitution.

In the visuals aired by some TV channels, the Kerala minister could be seen saying in a recent event that the Constitution of the country "condones exploitation" and is written in a way helping to "plunder" the people of the country.

Later, in a statement given in the state Assembly on Tuesday afternoon, Cheriyan said news reports claiming he had criticised the Constitution at an event held at Mallappally in Pathanamthitta district were "distorted".

Cheriyan's remarks against the Constitution have resulted in protests by the BJP and Congress in various parts of the state seeking his resignation. Effigies of the minister were also burnt.

Both Congress and BJP have also forwarded complaints to the Governor's office seeking his intervention in the matter and alleging that the minister's remarks were unconstitutional.

Kerala Governor Arif Mohammed Khan, on Tuesday, left the ball in the CM's court by saying that he was sure the head of the ruling dispensation in the state would take notice of what had happened. PTI