Ramakrishnan happened to see the boy and his mother at the shop veranda when he was working in Vadakkekadu police station in 1997. 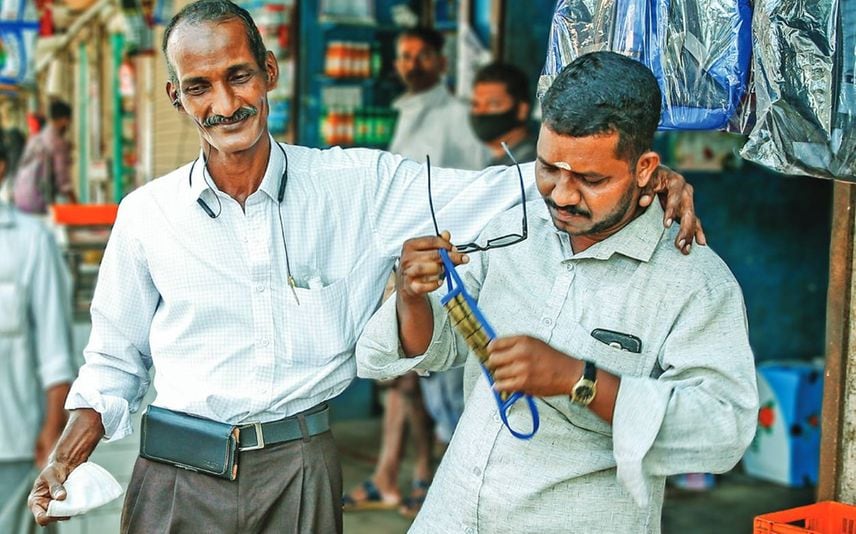 Traffic SI Ramakrishnan and Manikandan meet again at the shop veranda at Althara junction. They moves the masks a little bit for the photo. Photo: Maneesh Chemancherry

Thrissur: Even after 23 years, the echoes of the heartbreaking cry of a class 6 boy near his mother's body can be heard on the shop veranda here. Both the crying child and the policeman who helped him met again at the same veranda on Monday.

The police officer Ramakrishnan who helped hundreds of orphaned children is currently working as Traffic SI in Thrissur. Manikandan, the boy whom he helped years ago, is working in a private company after graduation and is living with his wife.

Ramakrishnan happened to see the boy and his mother on the shop veranda when he was working in Vadakkekadu police station in 1997. One day, he heard that the mother died on the shop veranda near Althara junction and the boy was crying helplessly. Hearing this, Ramakrishnan did not even wait to wear his uniform and ran to the place.

He helped the locals in cremating the body of the woman who had no relatives. He also consoled Manikandan who kept crying all the time. Later, he was given a shelter at the RSS office. The locals also helped to provide him education, job and arrange his wedding. Ramakrishnan also supported him.

This is only one of the many incidents witnessed by Ramakrishnan. He used to take care of his mother and three sisters at a single-room shelter in Patturaikkal in his childhood. As his father died when he was 6, Ramakrishnan was struggling to protect the family through newspaper distribution and vegetable sales.

He studied under street light and completed SSLC and pre-degree. Later he got appointment in police force. After joining the force, he also obtained a degree. He is one of the rare officers who politely rejects the rewards for excellence in service. He married off his sisters and remained single in his life. He lives in Palissery with his mother.

Ramakrishnan spends his free time for charity works only. The amount he gets through leave surrender every year is given for the poor people. Also he helps many people with the PF money. People who know him well also state that he does not do charity for publicity and fame. After retirement next year, he will be present in Thrissur for charity works.