A photo of a KSRTC driver has been doing the rounds on social media along with a caption that he is wearing religious attire instead of the uniform. The picture claims to have been taken during the bus service conducted from Thampanoor in Thiruvananthapuram to Mavelikkara. Mathrubhumi inspected the fact behind the picture.

A bit of background checkup

The driver’s attire looks like a thobe worn traditionally by Muslim men. He is also wearing a cap worn by men of the Islamic faith. It is based on these grounds that the picture was circulated with the caption that he was driving the bus while sporting religious wear.

The team contacted Thiruvananthapuram Central Bus station. The officials informed that the photo has come to their notice and that the bus belongs to the Mavelikkara depot. The team then contacted the Mavelikkara depot. The officials there confirmed that the driver is an employee at the depot and that the allegations against him are baseless. The driver is wearing a sky blue coloured shirt and navy blue pants. The shirt seems white either due to the poor quality of the picture or the wear due to washing of the cloth or even because the photo was doctored. The driver was wearing a full sleeve shirt and had laid a washcloth over his lap, which made it look like he was wearing a thobe. According to the circular on the uniform of KSRTC drivers, a sky blue shirt is mandatory. The employees are allowed to wear full or half sleeves and there is no restriction on wearing religious symbols (like cap) 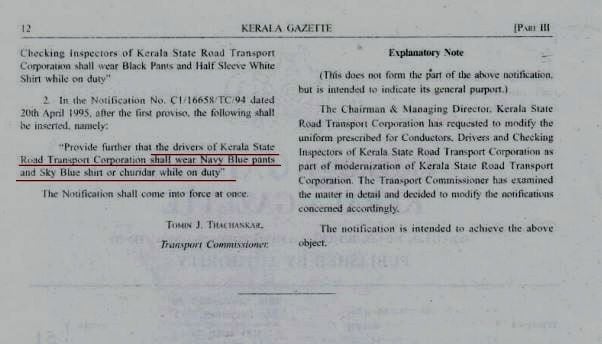 The allegation that the KSRTC driver was wearing religious attire instead of a uniform while driving the bus is baseless. The washcloth laid over his lap made it look like he was wearing a thobe, which led to all that discussion about the picture.

KSRTC suspends driver for ‘indecent behaviour’ at a lady passenger