“Even in despair, he remained very strong and calm. He used to support us, care us and share hopes. But what made him to take this extreme step still remains unknown,” added Pavithra. 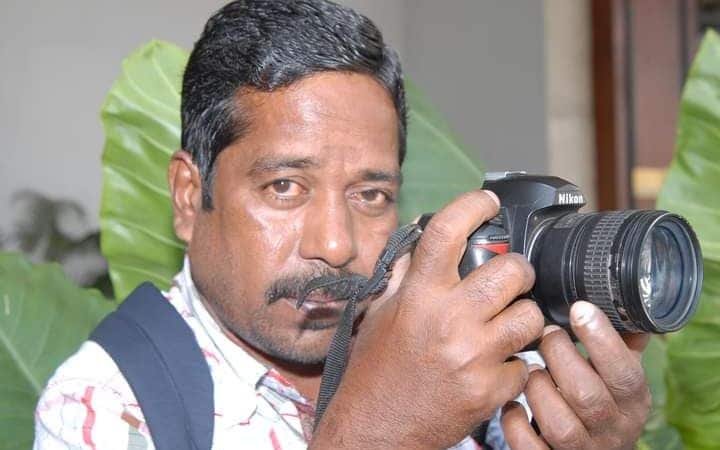 Kochi: “My father was under tremendous pressure as severe financial crunch darkened our life,” says Pavithra Kumar (23), daughter of Tamil Nadu based veteran photo journalist, T Kumar (56), who ended his life a few days ago as he was not paid full salary for nearly five years now. According to reports, he was found hanging in his office in Chennai on Sunday.

“He was very much concerned about my engagement on February 20th ( the engagement has been postponed ) as he did not have enough cash in hand to meet the expenses. He was looking out all ways to arrange money for the engagement. He even requested Rs 5 lakhs from the salary arrears of Rs nearly 30 lakhs, which the company was supposed to pay him. Repeated communications with the company failed to yield any result and he was very upset,” said Pavithra.

However, she never expected him of taking this extreme step. “Even in despair, he remained very strong and calm. He used to support us, care us and share hopes. But what made him to take this extreme step is still remain unknown,” added Pavithra.

Now we don't know, how to go ahead as he left us alone, she lamented. “When I looked at his Gmail In-box, I saw a message from the company informing him that the salary arrears of July 2017 was cleared. The message came in the first week of February. Imagine the situation of a person who is forced to wait for years to get the salary of the work done. My father was very loyal to his work and he was very much dedicated,” added Pavithra.

Kumar was working with the United News of India (UNI) for 36 years as its state bureau chief. He was the first photographer to become the state head of the agency in Tamil Nadu.

“We live in a metropolitan city, where the expenses are quite higher. He never received full salary for the last five years, but he had managed so far. Everything must have gone out of his control, otherwise he would not have done this. We can make money but we will not get him back; he was a loving father and a caring husband,” added Pavithra.

Pavithra had a word with the company after his demise. “I requested them to release his salary arrears; but they are not willing. I was told that the company can clear the dues gradually by paying part-by-part. They are not moved an inch by the death of my father,” added Pavithra.

Kumar is survived by his wife Kavitha (47), Praveen (26) and Pavithra. Kavitha is a home maker and his children work at a private firm in Chennai.

There are as many as 240 journalists on 'wage board pay' and 80 contract-based journalists working with the UNI across the nation. Mathrubhumi.com has a word with many journalists and found that none among them received full salary after 2017. Even the retired employees of UNI, did not get their end-of-service-benefits and salary arrears.

“I retired in the year 2018. But my PF, gratuity and other benefits are yet to be cleared and the salary arrears too. I hope it will be cleared soon,” said a journalist who wants to remain anonymous.

Mathrubhumi.com has found that the news agency was functioning without any major trouble till 2010. With the wage board recommendations, the financial burden of all media organisations doubled and it forced them to take measures to cut cost. To reduce cost, they opted to subscribe to only one agency and most of them preferred PTI over UNI. “The quality of UNI services was poor compared to PTI due to various reasons and it was the reason why news organisations preferred PTI over UNI,” said a journalist.

The crisis that started in 2010 became severe after Prasar Bharati (PB) withdrew its subscription in 2017. “UNI used to get Rs6.5 crores annually as subscription fee from PB and it constituted half of its revenue. When it was stopped, the crisis became deeper,” said Ajay Kaul, Editor-in-Chief of UNI.

It is also learned that the UNI management has written to the Prime Minister's office and the Ministry of Information and Broadcasting addressing these issues.

Ajay admitted that the company faces severe financial crisis and it has been looking out way to overcome it. “Even during the crisis, UNI paid all its staff salaries partly. All its employees are happy and got adjusted to the issues with a hope that all dues will be cleared soon,” added Ajay Kaul.

He also said that the measures are in full swing to revive the performance of UNI. “It was a few years back, I joined UNI. I don't want to comment about its past. We are in a mission to improve quality and the issues, which we face now, will be cleared soon,” he added.

Ajay Kaul has told Mathrubhumi.com that the recent death of Kumar was so unfortunate. “I was in constant interaction with him and the firm had helped him financially during various intervals. Last time, when his wife was injured, Rs25,000 was released immediately as the company did not neglect him at all. He was a cool guy and I am still unable to believe such an action from his side,” said Ajay Kaul.

CPM blames RSS for attack on its office in Thiruvananthapuram