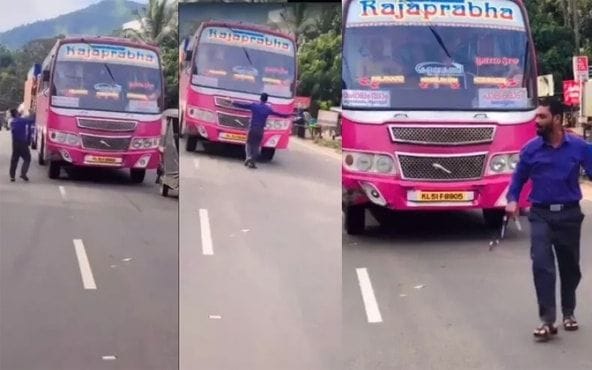 The visuals of principal interceding the bus | Photo: Social Media

Exasperated by the apathy of authorities concerned, a school principal interceded a private bus for allegedly denying travel to the students. The visuals of the incident have emerged on social media and the principal is garnering the support of netizens for his act.

Dr N Sakkeer (also known as Sainudheen) of PTMHSS Thazhekode in Malappuram is the person who scored the street and stopped the bus. He is also the state president of the principals’ association.

According to Sakkeer, the students have been complaining about the limited-stop bus Rajaprabha operating on the Kozhikode-Palakkad route. Though the matter was intimated to the police, there was no proper action. The students allege that the bus won’t halt at the stop near the school, regularly. Even when they try to enter the bus, it will be rushing off dangerously, the students said.

Meanwhile, Sakkeer earlier tried to intercede the bus, but that attempt failed as the bus rushed through the way. To avert that he in his second attempt modified the arrangement of a divider placed in the road, and the bus had to slow down.

Sakkeer also ensured that students and locals were unaware of his attempt as the presence of a mob may make the situation conflict-prone.