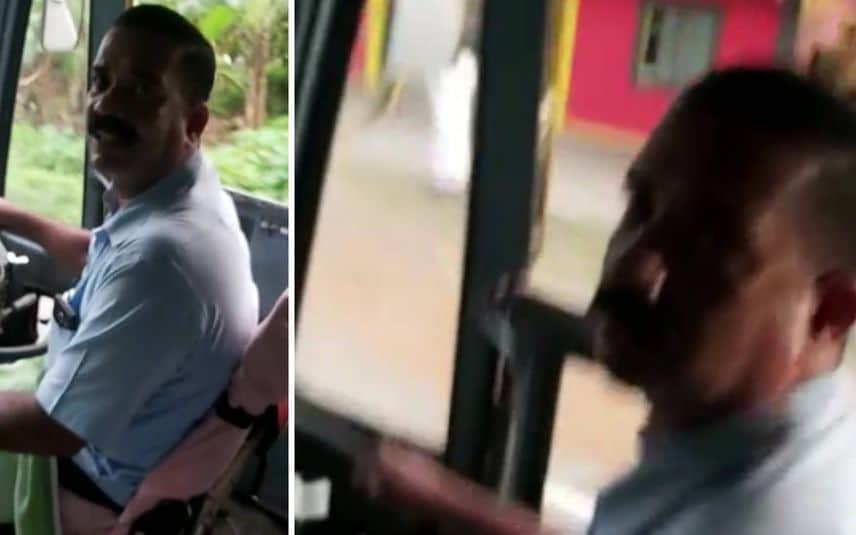 Visuals from the purported video captured by Firoz

Thenmala: Firoz, a native of Urukunnu here in Kollam has captured a video of an incident that happened while he was travelling in a KSRTC bus. It shows a KSRTC driver raging against him as he questioned the driver for not stopping the bus at his request. The bus was moving while the driver acted against Firoz.

According to Firoz. he was attacked by the driver and had to take treatment. He has lodged a complaint with Thenmala police.

The alleged incident happened on Friday at around 6:15 PM. Firoz said that he boarded the KSRTC bus from Chemmanthoor, near Punalur. While boarding the bus, he had confirmed that the bus would stop at ‘Canal Palli’ near Urukunnu for him to deboard. However, the bus did not stop there. This irked Firoz and he can be heard asking in the video why the bus did not stop in spite of the assurance. The KSRTC driver can be seen annoyed and he repeatedly asked “What he (Firoz) is up to?”. The video shows that the driver tried to obstruct the capturing of the incident while riding the vehicle. Firoz can be heard warning the driver that the bus was moving.

Firoz claimed that while trying to snatch the phone from him, he received blow at hand and neck. He added that the driver dropped him at a point which is 1.5 km away from Canal Palli. He added that he then took treatment at Punalur Taluk Hospital and later lodged a complaint with police.

Afghan national stranded abroad without visa for 2 yrs, family awaits in TVM for his return