Lok Ayukta ordinance: Opposition leader writes to Guv, urges him not to give assent 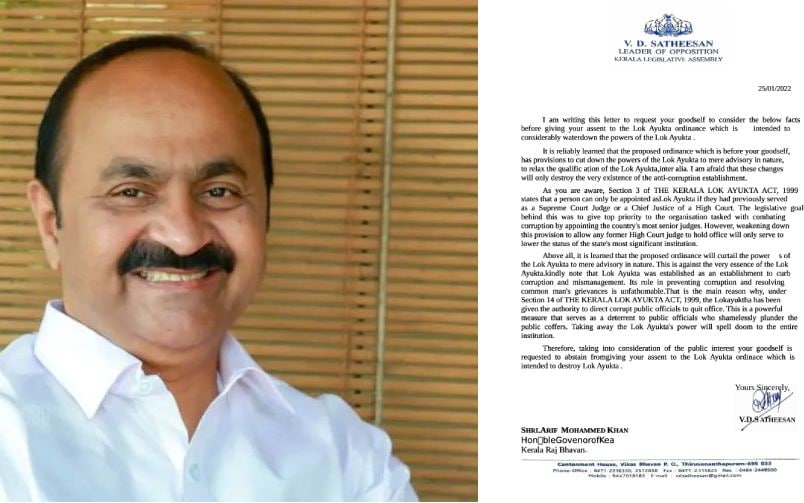 VD Satheesan - The letter sent to the Governor

Kochi: In the wake of reports that an ordinance with amendments to dilute the powers of anti-corruption establishment Lok Ayukta has been submitted by the state government, Opposition leader VD Satheesan has written to Governor Arif Mohammed Khan. In his letter Satheesan has urged the Governor to abstain from giving assent to the ordinance as it “considerably waters down the powers of the Lok Ayukta’.

According to Satheesan, the proposed ordinance will make the Lok Ayukta limit the role to a mere advisory body. He pointed out that the state government move is against the very existence of Lok Ayukta.

The Opposition leader cited various powers and authorities of the body in his letter and requested the Governor to consider the same as diluting its jurisprudence will “spell doom to the entire institution”. He pointed out that the body has the power to ask the public servant to quit if allegations against the person are found true. He urged the Governor to take a decision that upholds public interest.

Meanwhile, Congress veteran Ramesh Chennithala criticized CM Pinarayi Vijayan and compared him to PM Narendra Modi. According to him, both follows a pursuit to dismantle bodies with judicial powers, which is antithetical to democracy.

Thiruvananthapuram: A GST Intelligence official attached to the Kochi unit has gone missing since April 30, his family said.Aji Kumar, who hails from Kollam, ..