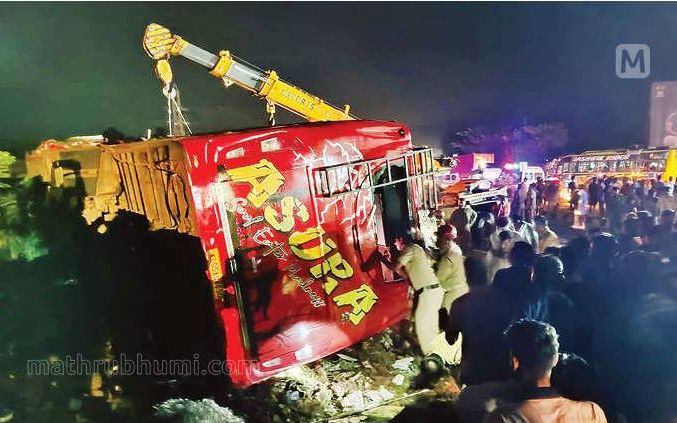 Palakkad: Many were left in tears after a tourist bus bound to Ooty for an excursion carrying school students rear-ended a KSRTC bus in Vadakkencherry killing nine passengers on Wednesday night.

KSRTC bus driver Sumesh and conductor Jayakrishnan said that the tourist bus was overspeeding and crashed on the rear while trying to overtake them near the Managalam bus stop.

The tourist bus was carrying students of Baselios Vidyanikethan Senior Secondary School in Ernakulam. As a result of the crash, the bus instantly lost control, overturned and landed in a swamp nearby.

Not against Shashi Tharoor: Kerala leaders ...

A crane was later brought in to lift the bus to rescue passengers stuck inside the bus. Initially, the vehicles that passed through the area refused to assist in evacuating the injured. Later, a van was used to carry the injured to the hospital.

After 9 PM, the excursion group stopped briefly for refreshments. During this time, many students contacted their parents. However, the parents were left in panic after the news broke out that their children were involved in an accident in Palakkad.

The parents told the media that the students, who were not seriously injured, contacted them through the phones of locals in the area. Many students were unable to explain how the accident happened since they were sleeping. However, some students said that the bus was overspeeding at the time of the accident.

Twin brothers travelling with mother meet with accident in TVM; one dies, one critically injured