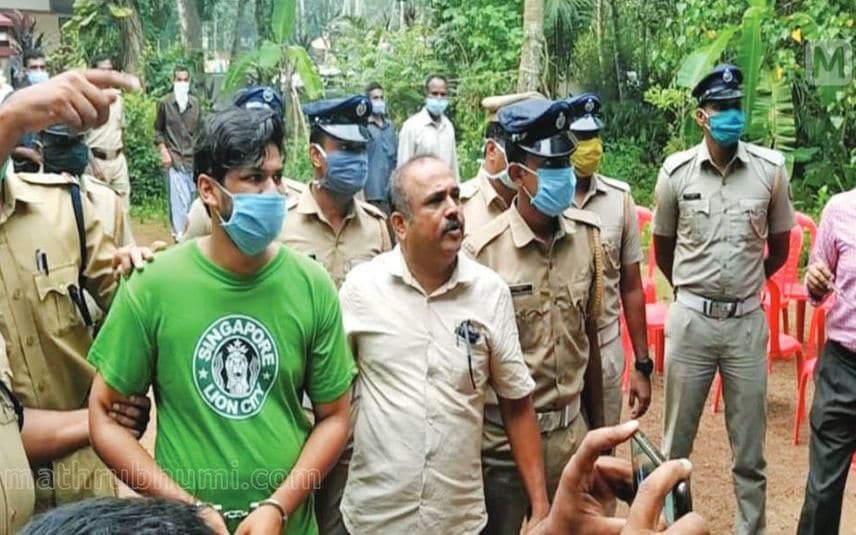 Kollam: The additional sessions court in Kollam has pronounced the verdict in the sensational Uthra murder case. Uthra’s husband Suraj was found guilty of the crime under Section 302, 307, 328 and 201. The quantum of punishment will be announced on Wednesday.

Suraj was produced before the court by 12 noon amidst tight security and court proceedings started soon after. Uthra's relatives and other well-wishers also arrived at the court.

The prosecution sought death sentence for Suraj and said that the crime was brutal. The court read the charges and explained to the accused. When the court asked if he wants to respond, Suraj said he has nothing to say.

It is the rarest of rare cases and reportedly, the first case in Kerala in which the accused tamed a snake and made to kill a person. The accused, Suraj, Uthra’s husband, made the snake bite her twice. The probe team conducted an experiment using a dummy and live snake to confirm the same.

The objective of experiment was to scientifically prove that Suraj held the snake’s head to induce bite as there is a chance that she will escape snake’s natural bite.

The prosecution has batted that Suraj did not disclose what happened to Uthra, though he was in the room when snake bit her and that was something crucial. Likewise, experts give statements that cobra is very less likely to enter by the window in the room and all other chances can be ruled out.

Initially, the parents of Suraj said their son was innocent. However, when he was arrested, they said he should be punished if guilty. Later, it came to light that Suraj’s parents and sisters also were involved in the crime and were aware.

When they were contacted ahead of the court verdict, the family refused to react on the case. They are staying inside their house in Adoor without keeping any contact with the neighbours and others.

The family was under suspicion after it was found that Suraj buried Uthra’s gold on the compound following her death. Suraj’s parents and sister are accused in the domestic violence case registered in connection with the murder.

Suraj was a cheat: Uthra's brother

Vishu, brother of Uthra, stated that Suraj is a cheat who was only concerned in money and gold. He alleged that Suraj crookedly killed his sister. Vishu vented his anger and cast allegations against Suraj and family.

Suraj had no grief over Uthra’s death and was very calculative in killing her, Vishu alleged. He also claimed that Suraj’s family members were aware of his pursuit and did not discourage him. They escaped the charges as the incident happened in our home, Vishu said.

The cold-blooded murder case of Uthra had sent shockwaves across Kerala and triggered debate on crime against women is at a crucial turning point. On May 7, 2020, Uthra was found dead due to snakebite at her house in Anchal.

According to the police, Suraj, who married Uthra for financial gain, killed her in a planned murder. The charge sheet was filed on the 82nd day of Suraj's arrest. The investigation was conducted through scientific methods, including dummy trial.

The police conducted an experiment with a dummy of Uthra to collect evidence of snakebite. A police team led by a former rural SP conducted the dummy experiment July last year. Mathrubhumi News has received the video footage of this experiment.