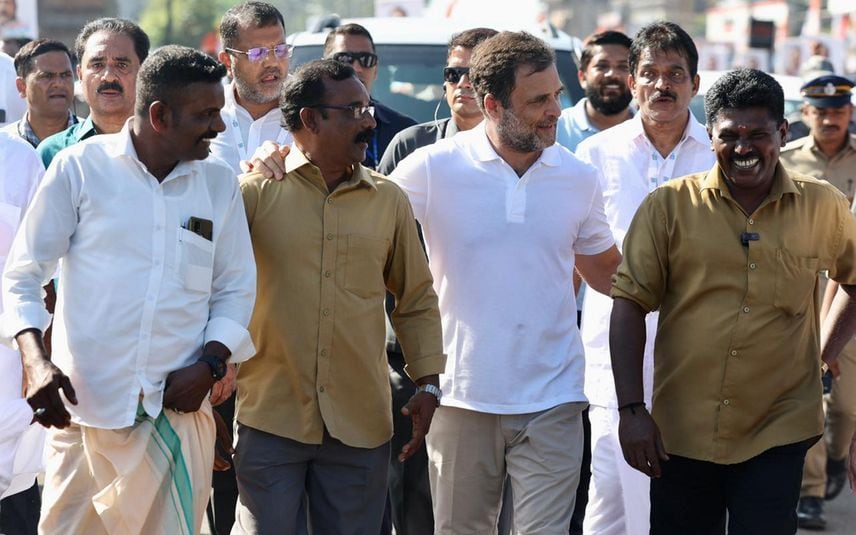 Kollam: Congress leader Rahul Gandhi on Friday targeted the BJP and RSS over the rise in unemployment rate in the country and alleged that the NDA government at the Centre was interested only in protecting a few businessmen of the nation.

Addressing a massive crowd of thousands at Karunagappally, during the culmination of the ninth day of the Bharat Jodo Yatra, Gandhi said the second richest man in the world now is a close associate of a leader of this country.

"I want to ask you a simple question. If India has the second richest person in this world, then why are we having one of the highest unemployment rates? The reason why millions of Indians are unemployed is because the government is interested in protecting only a few businessmen of this country."

The Congress leader claimed that millions were losing jobs due to disinvestment and privatisation of public sector companies.

"Who all are taking over these public sector undertakings? They are going to the same five or six businessmen of this country, who are reaping the benefits from this government," he alleged.

In his address which lasted around 20 minutes, Gandhi said the people of the country know what the RSS and the BJP have done to this beautiful country.

"They (people) can see that hatred is being spread by the BJP and the RSS. They can see how the BJP-RSS makes one brother fight another to come to power. how they divide people along religious, communal and linguistic lines," he said.

Continuing his tirade against the RSS, Gandhi alleged that the outfit considers women as 'second class citizens'.

"For the RSS, the women of India are second class citizens. They do not have the right to express themselves. RSS think they can define the role of women. The people of this country can understand that this creates a rift in the nation. They understand that a family that fights among itself is weak."

The Congress leader said millions have joined his 'Bharat Jodo Yatra' to show that they will not allow the BJP and the RSS to undermine this country.

"A country that is full of anger, hatred cannot have a vision for the future. It is very easy to spread hatred... But you will not go forward and progress," he said and stressed the need for communal harmony in the country.

The Congress leader lambasted the BJP and RSS, saying "both the organisations are designed to benefit a limited number of people."

"... The evening padayatra saw packed crowds and the atmosphere was festive, peppered with vibrant cultural performances enroute. The yatra culminated with a public address by @RahulGandhi at Karunagapally," he tweeted.

Sharing a brief video of the festive mood of the yatra on twitter, Gandhi said, "love will prevail over hate."

"Our love will prevail over the politics of hate. People are my companions and together we are connecting India," he tweeted.

Thousands thronged either side of the national highway to catch a glimpse of Gandhi and the yatra.

There was a 'chenda melam' (a traditional percussion instrument band) by all women members to welcome Gandhi when he reached Karunagappally.

Many joined Gandhi, when he began his evening leg of the foot march from the Chavara bus terminus waving Congress flags and accompanied him till Karunagappally, 10 kms away.

In the morning, the march started from Polayathodu, covering a distance of almost 13 km.

Why do our bodies crave junk food?

There is no way to justify unhealthy junk ...