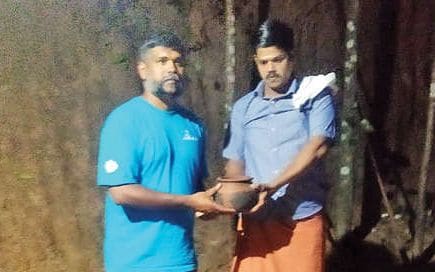 Ollur: Umesh Yadhav, a musician known for his patriotic mission of collecting soil from the houses of slain soldiers in an urn, last day visited Kerala. His visit was to collect soil from the burial place of Indian Air Force Junior Warrant Officer A Pradeep, who was killed in the chopper crash at Coonoor on December 8. Yadhav on Saturday reached late Pradeep’s house at Ponnookara in Thrissur district. He collected the soil in an urn and returned after seeking the blessings of Pradeep’s parents.

Notably, Yadhav is on a one and half year-long mission to collect the soil from the houses of around 142 slain soldiers and carry it to the memorial in Pulwama. He has collected the soil from the burial of soldiers including Chief of Defence Staff Bipin Rawat who died in the helicopter crash at Coonoor.

It was soldier-turned Malayalam movie director, Major Ravi, through his official social media handle informed netizens about Yadhav’s visit to Kerala. Yadhav was also helped by Ravi in contacting the family members of the deceased soldier.