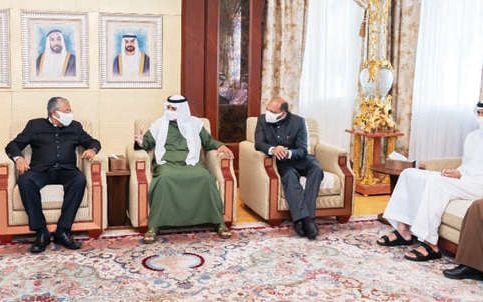 Abu Dhabi: Sheikh Nahyan bin Mubarak Al Nahyan, a member of the Abu Dhabi Royal Family and Cabinet Minister of UAE, has praised Keralites for their role in the overall development of the country. He lauded the efforts of Keralites during a meeting with Chief Minister Pinarayi Vijayan in Abu Dhabi on Tuesday.

Sheikh Nahyan said that Malayalees of high intellectual level will always be an asset to the country and activities based on mutual cooperation will provide a better future. He added that the continuation of the government led by Pinarayi Vijayan will be more beneficial for the development activities in Kerala. The Chief Minister thanked the government for its gratitude and explained the potential of the state in attracting investments.

Sheikh Nahyan, who is also the Expo Commissioner General, accepted the Chief Minister's invitation to be the chief guest at the Kerala Pavilion Expo 2020 on Friday.