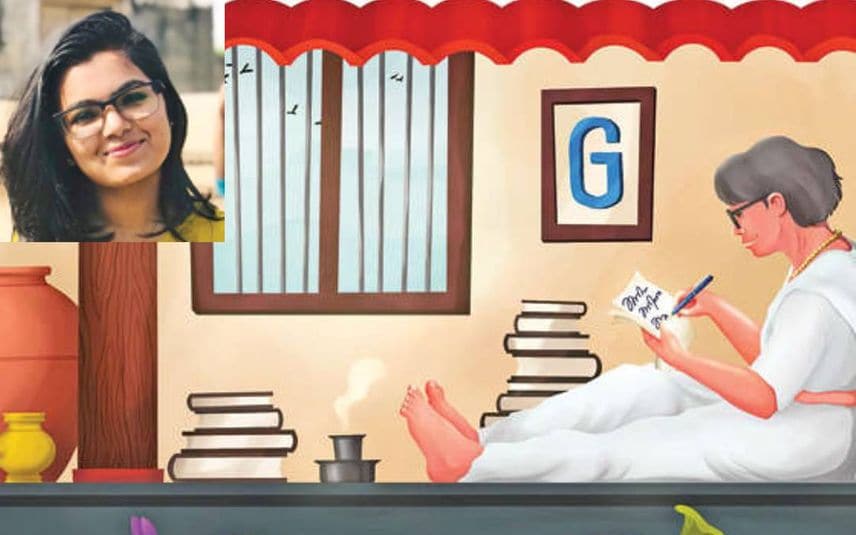 Thiruvananthapuram: Google on Tuesday paid tribute to legendary Malayalam poet Balamani Amma on the occasion of her 113th birthday with an eye-catching doodle art designed by a Malayalee girl from Thiruvananthapuram.

Devika Ramachandran, a Keralite hailing from the state capital, designed the doodle art for the auspicious occasion after Google decided to find a Malayalee to draw the photo. After getting impressed by the drawings in her Instagram profile, Google LLC contacted her from its New York office and requested to submit some samples.

It took more than a month for her to draw all her submissions to Google, says Devika who is an illustrator artist in an advertising company in Hyderabad.

Balamani Amma, born in Kerala's Thrissur district of Punnayurkulam, was homeschooled by her uncle Nalappat Narayana Menon, who was a famous Malayali poet himself. She got married at the tender age of 19 to the managing editor of a Malayalam newspaper, 'Mathrubhumi', VM Nair.

The veteran poet was a voracious reader of Indian mythology and carved poetries based on powerful women characters. Her early works of art included portraying motherhood in a brand new light, and these were adopted from mythological characters. Amma soon bagged the title of 'Poetess of Motherhood'. She wrote about powerful women in the guise of ordinary human beings.

Amma's first poem titled 'Kooppukai' was published in 1930 when she was 21 years old. Parikshith Thampuran, the former ruler of Cochin crowned her as a poet by awarding Amma the prestigious Sahithya Nipuna Puraskaram. Some of her notable poetries include 'Amma', 'Muthassi', and 'Mazhuvinte Katha'. She has over 20 anthologies of poems, prose and translations to her name as well.

Most of her works of poetry centred around her love for children and grandchildren which earned her the household names of Amma, meaning mother and Muthassi, meaning grandmother in the field of Malayalam poetry.

Amma was honoured with several awards, including the coveted literary award, the Saraswati Samman and also the most esteemed civilian award, 'Padma Vibhushan'.

Amma breathed her last on September 29 in 2004 at the age of 94. Famous poet, the late Kamala Das, who was awarded the Nobel Prize in literature in 1984, was Amma's daughter.