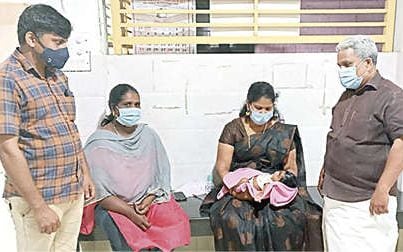 Neyyattinkara: A couple from Kavalakulam under Thiruvananthapuram’s Neyyattinkara municipality was found dead at their rented house while their 20-day-old newborn baby girl was found unattended and in poor health condition on Monday. The deceased are Shiju Stephen (45), a man engaged in painting works and his wife Pramila (37).

According to preliminary investigation, the incident that happened on Monday evening looked like suicide. The man was found on the floor, while the woman was found hanging from a ceiling fan. There were marks of rope on the man’s neck.

Sources said that the family have not given rent for the past four months, but the house owner was very considerate towards them. Similarly, they were not able to pay the home nurse whom they hired to take care of the newborn. The suicide came to light when the home nurse came to the house with food items. As there was no response on knocking the door, she informed the matter to house owner.

The landlord along with ward councillor came and saw the couple dead. They informed police. As the baby was found alive, the ward councillor and others took her to the Neyyattinkara general hospital. However, as her health condition worsened, she was shifted to SIT hospital. It is learnt that the baby is recovering. The Child Welfare Committee has been informed.