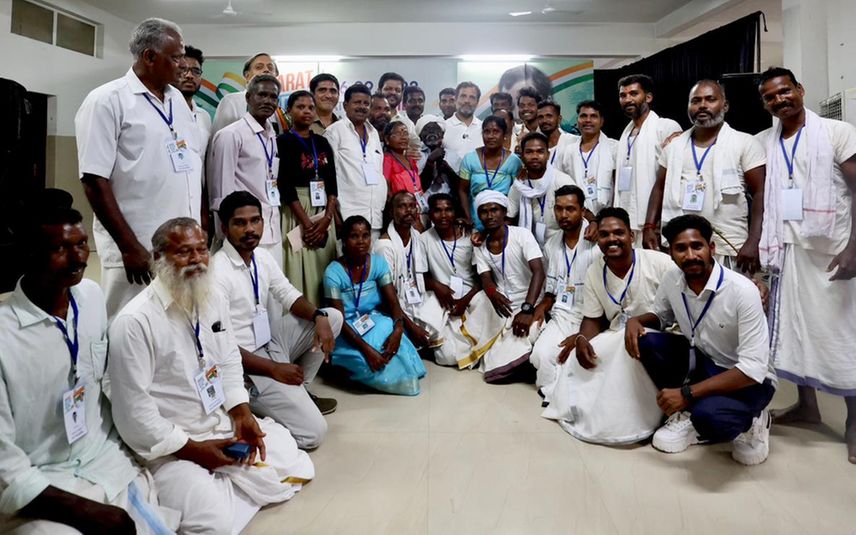 Palakkad: As the Bharat Jodo Yatra entered Palakkad district, Congress leader Rahul Gandhi on Monday met the leaders and representatives from tribal communities, particularly from Attapadi in the district.

The interaction started with a song on unity dedicated by the delegation to the Bharat Jodo Yatra.

During the interaction, one of the representatives expressed the need to set up coaching centres for competitive exams in tribal areas.

A doctor from the community practicing tribal medicine, asked for tribal medicine to be included into AYUSH and raised the need for mentorship programmes to prevent school and college dropouts among tribal students.

Gandhi drew a parallel with a study carried out in the US where it was noted that African Americans and indigenous populations face discrimination, both explicit and hidden, while appearing for the SAT exams.

He added that an education system that does not take into account the experiences of the tribals while designing exams puts the students coming from the community at a disadvantage.

"I believe tribal culture is as important as every other culture, not better, but equal to all cultures," Gandhi said.

Gandhi noted that tribal people are the best protectors of forests and understand the environment better than bureaucrats and experts.

"It's understandable that the tribal students may feel suffocated in the schooling system that does not incorporate their traditions and beliefs in the education system. We have to bring in elements of tribal culture into our curriculum," he said.

The tribal representatives also complained about the government taking over their places of worship and pushing them out. They said they were now forced to pay for the puja and are not allowed to touch the gods.

The representatives of the tribal communities also requested for better medical facilities and hospitals because they have to travel long distances during emergencies and also pointed to diet changes and its impact on them.

They also sought Gandhi's help to preserve their culture and traditions and requested for a museum and arts centre.

Gandhi noted that it was very essential, and important to make sure the tribal youth take pride in their culture and traditions. He made a strong point about the need for a level playing field for the tribal youth.

The meeting concluded with a dance performance by the tribals.

In the morning leg of the yatra, Gandhi was joined by Commonwealth Games silver medallist in the triple jump event, Abdulla Aboobacker.

The Congress' Bharat Jodo Yatra will cover 3,570 kilometres in 150 days. It started from Kanyakumari in Tamil Nadu on September 7 and will conclude in Jammu and Kashmir.

The yatra, which entered Kerala on the evening of September 10, will go through the state covering 450 km, touching seven districts in 19 days before entering Karnataka on October 1.