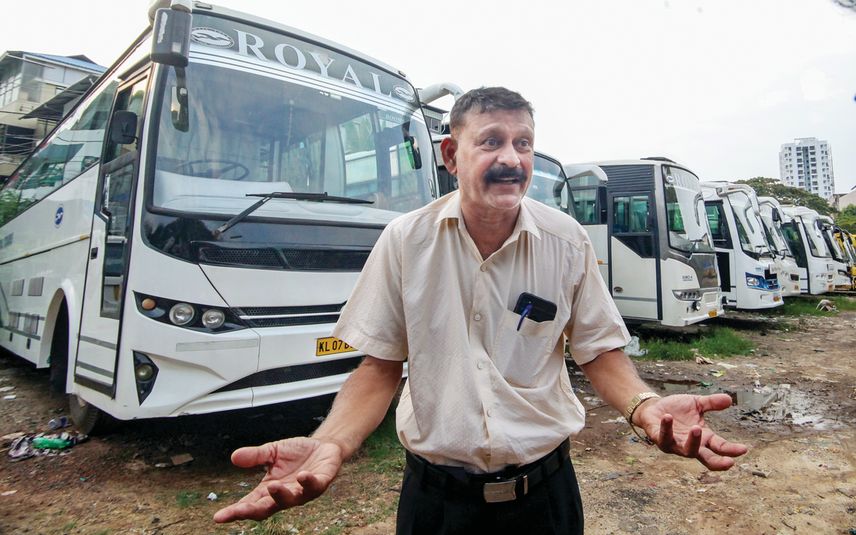 Owner of 'Royal Travels' in front of buses kept for sale

Kochi: Within two months, over 500 tourist buses were sold as scrap due to the huge debt caused by Covid 19. The bus owners were distressed by the road tax and maintenance of vehicles at a time when no revenue could be obtained from the buses.

There were more than 14,000 contract carriage vehicles with over seven seats in Kerala. Among them, 2,000 vehicles were seized by the financial companies within the last two months. The Contract Carriage Operators Association informed that if the situation persists, 3,000 more vehicles will be lost by March this year. Meanwhile, the owners are being compelled to sell their buses for a meagre amount. Only a maximum of Rs 45 per kilogram can be obtained when the vehicles are sold for scrap. Thus, Rs 4 lakhs will be received when a bus with 49 seats is sold out.

The owners attempt to get rid of the vehicles that can be easily run for five years or more, anticipating at least to acquire the amount to repay the debt. Most of the bus owners have bought buses with 75 per cent loan. Multi-axle buses worth Rs 1 crore is also lying idle in the state.

Kerala had sold tourist buses to Andhra Pradesh and Telangana to be used as school buses in rural areas and the vehicles which have plied only a few kilometres received better price. But the central government’s move banning categorisation of buses three years back restrain Kerala from selling the used buses to other states.

Caravan tourism, a ray of hope

The owners of tourist buses request the government to include the private players also in caravan tourism project. The owners have to procure permission to convert tourist buses into caravans. Many of the bus owners have registered their names in the tourism portal. When they approach Kerala State Industrial Development Corporation (KSIDC) for financial support, the agency asks to pay Rs 1 lakh and GST as fees for the proceedings.