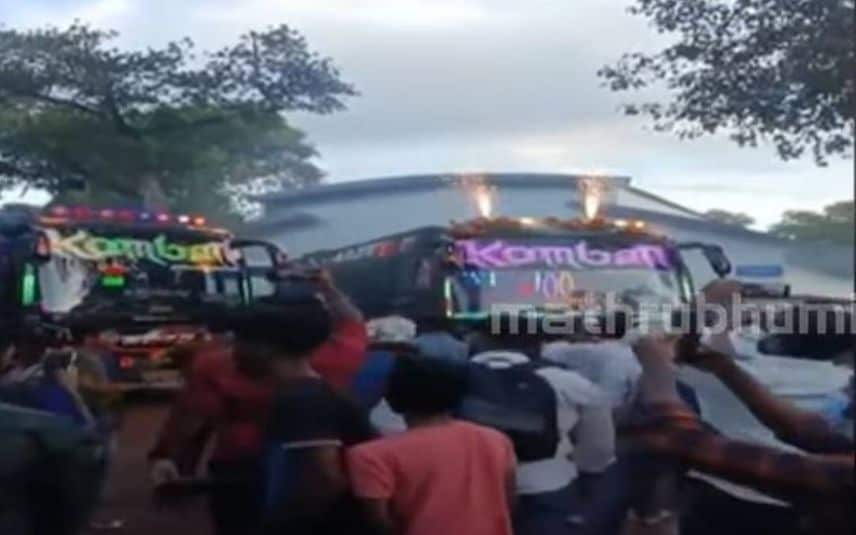 Alappuzha: The RTO here on Monday seized two tourist buses operated by Komban travels over an incident in which the bus staff member lit ‘Poothiri’ (flower pot) atop the bus. The official has taken the action after a video of the incident surfaced on social media.

The two buses were seized from Punnapra and Thakazhi. Though the bus changed its route after finding the officials at Ambalapuzha, the MVD officials managed to chase down the bus.

The RTO slapped a penalty of Rs 36,000 on the two buses for violation of the Motor Vehicles Act. Kollam police will register another case over bursting ‘Poothiti’ atop the bus.

The two buses will be handed over to the enforcement wing.

One of the tourist buses caught fire after a staff member kindled ‘Poothiri’ (a type of firecracker) atop the bus before starting the pleasure trip from an engineering college in Kollam on June 30. The MVD registered a case against the tourist bus after a video of the incident surfaced on social media.

The college authority asserted they are not involved in the incident. They explained that the tourist bus operators themselves lit the ‘Poothiri’ to entertain the students.

All firecrackers sale licenses in Delhi suspended ahead of Diwali