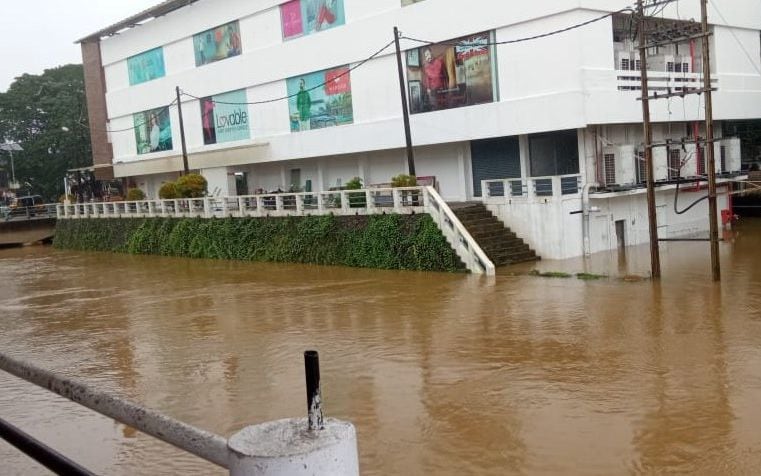 Pala town in a flooded state

Thiruvananthapuram: The state is getting equipped to face a probable flood situation due to the heavy downpour over the past couple of days. IMD issued a red alert in Alappuzha, Idukki, Kozhikode, Wayanad, Kannur, Thrissur, Ernakulam, Palakkad, Kottayam and Malappuram districts. The Kerala State Disaster Management Authority (KSDMA) has warned that heavy rains may soon hit northern districts as well.

Currently, the districts mentioned above are receiving more than 214.5 mm of rainfall per 24 hours. A red alert indicates heavy to extremely heavy rains of over 20 cm in 24 hours, while an orange alert means very heavy rains from 6 cm to 20 cm of rain. A yellow alert means heavy rainfall between 6 and 11 cm.

KSDMA officials have asked people to exercise caution and those affected by floods in 2018, 2019, and 2020 to move to safer grounds. The local body institutions and other government bodies were also instructed to make all necessary arrangements by foreseeing the possibility of a disaster.

The Central Water Commission has issued flood warnings for Pullakkayar in Kottayam, Maadaman, Kallooppara in Pathanamthitta, Vellaikadavu and Aruvippuram in Thiruvananthapuram, Pamba, Achankovil, and Manimala rivers.

In Idukki, shutters of Malankara dam were raised by 120 cm each, letting 300.03 cu ft water out. It will cause a rise of water level in the Thodupuzha and Muvattupuzha rivers. Catchment area of Kundala reservoir is witnessing a heavy rainfall. Hence the shutters were raised by 50 cm. This will reach the Mattupetty dam.

Fourth valve of Peringalkuthu dam was opened in the morning causing an increase in water level in Chalakudy river.

Three shutters of Kanjirapuzha dam will be raised 35 cm each.