TN CM slams BJP over bid to do away with diversities, praises Kerala CM for ideal administration

The CM pointed to the BJP-led Centre's proposal like 'one nation, one election', and alleged that efforts were on towards a 'single education', system a 'single religion, language and culture.' 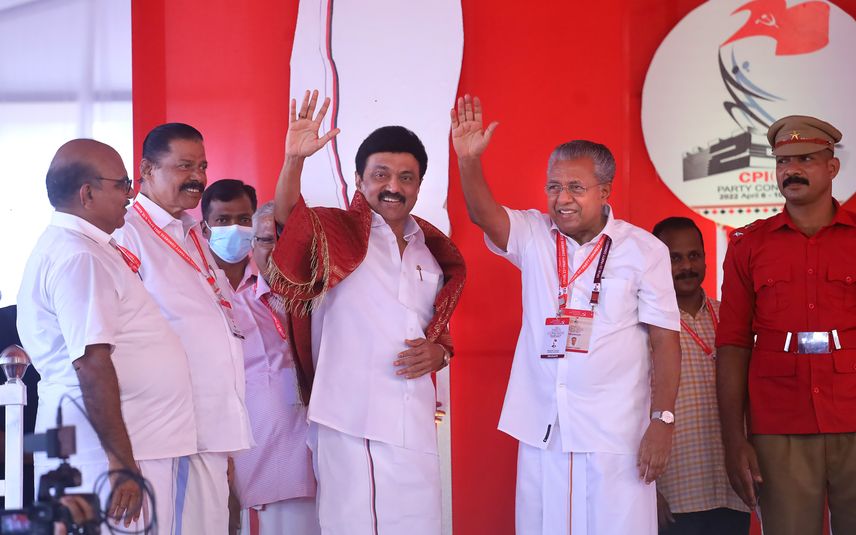 Kannur: Slamming the BJP and the government led by it at the Centre, Tamil Nadu Chief Minister M K Stalin on Saturday said unity in diversity is the nation's culture, but efforts aimed at 'eliminating' diversities and create a 'unitary' character were being made.

If India has to be protected, states should be first guarded and only if states are shielded, the nation could safeguarded, Stalin said addressing the 23rd party congress of the CPM here.

Some were changing the basic political norms, the Tamil Nadu Chief Minister said apparently hitting out at the BJP. Underscoring the nation's diversity including those related to religion, food and languages, Stalin said 'unity in diversity is our culture'. However, efforts were being made to eliminate diversities and create a unitary character, he alleged.

The CM pointed to the BJP-led Centre's proposal like 'one nation, one election', and alleged that efforts were on towards a 'single education', system a 'single religion, language and culture.'

Stalin said a 'single' chorus was now being sung for everything. Mocking at the BJP, he said at this rate, the trend may extend towards a single party system and and though the BJP may be happy with it, nothing could be more dangerous to the country.

Given such a scenario, the BJP has to be opposed and the 'Manilathil Suyathchi, Mathiyil Kootatchi', slogan is his party's voice against autocracy. The slogan could be roughly translated as autonomy for state and a share in power at the Centre.

He said the nation's Constitution makers did not envisage a unitary structure of power but were for division of powers as reflected in features like the state, centre and concurrent lists. The Panchayati Raj Act bestowed the local bodies with rights and thus only if villages grew, the state and the nation could witness development. Stalin was invited by the ruling Marxist party to deliver an address on Centre-state relations.

The Chief Minister praised his Kerala counterpart as one who exemplified ideal administration of a state government and on the one hand Pinarayi Vijayan has the trait to fight for rights and on the other hand, he has visionary projects.

Without bothering about the Central government, Vijayan is helming the government extremely well, Stalin said.

Vijayan's handling of the coronavirus pandemic witnessed admiration and in that respect, Stalin said the Kerala Chief Minister was his pioneer.

Using Article 356 of the Constitution, an elected Kerala government steered by CPI(M) was dismissed in 1959, Stalin said adding it was a first of its kind instance. The DMK governments too were dismissed twice, first in 1976 and then in 1991 using that Constitutional provision. Hence, both Kerala and Tamil Nadu and the CPI(M) and DMK have all rights to speak on the Centre-State relationship, he said.