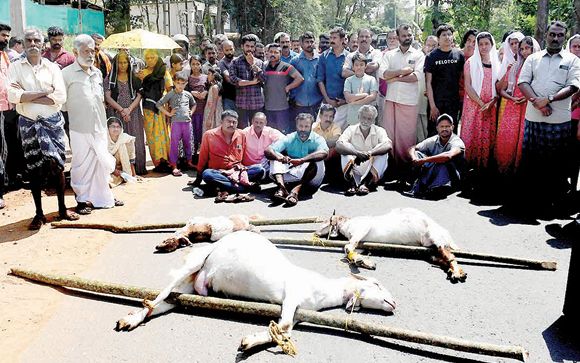 Wayanad: A section of residents in Meenangadi and Krishnagiri staged blockade on road, expressing their rage against supposedly failed interventions of authorities concerned in curbing tiger menace in the locality.

The residents blocked the Kozhikode-Kollegal National Highway stretch by placing domestic animals killed in suspected tiger attacks on sideways. As a result, the traffic was disrupted

The reaction from the residents comes at a time when the region witnessed deaths of 10 domestic goats in the last two days. All these goats were found dead either at their shelter or premises of the houses.

According to locals, the tiger menace has been giving them sleepless nights and affecting their livelihoods. The blockade continued until forest officials assured a part of compensation by Monday and remaining amount at the earliest.

The officials also assured that measures to curb the issue will be intensified and had a discussion with elected representatives in the region.

In the last week of October, forest officials in Cheeral captured a tiger that has been on the prowl in the locality for nearly one month. The big cat that kept the residents on toes fell in the trap placed near Pazhoor forest check post. It had been present in human habitation for a month, and attacked 13 domestic animals.