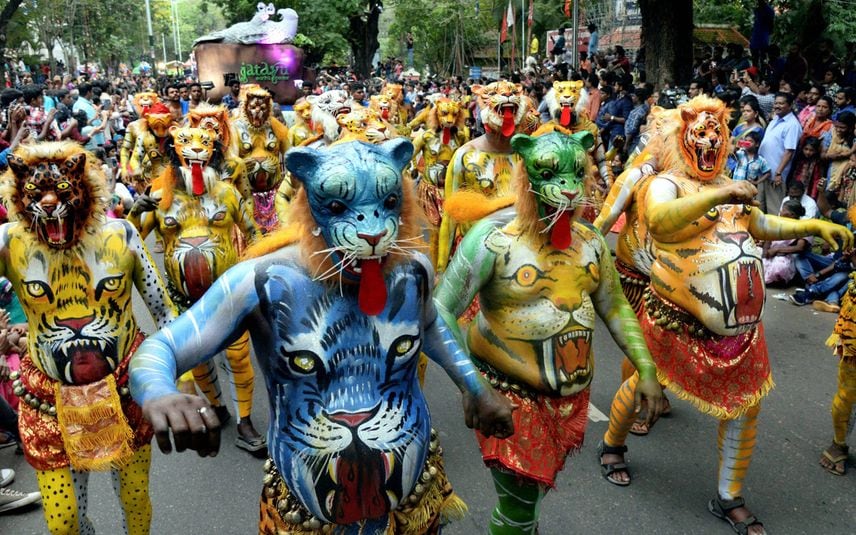 Thrissur: The festive joy of Onam will continue in Thrissur on Sunday afternoon, with Pulikkali artists flaunting their bodies adorned with paintings of tigers and leopards in bright colours. On Saturday, the organisers were unsure whether to conduct the event due to the state mourning of Queen Elizabeth II. Eventually, a decision was taken on Saturday to conduct the event sans official function.

Pulikali is organised by Thrissur Corporation with the help of the Tourism Department. Since it is a government-run celebration, there was a fear that the state would postpone Pulikali in the wake of the passing of Queen Elizabeth.

The issue was resolved when all government departments except District Tourism Promotion Councils (DTPC) decided to stay away from taking part in Pulikali. Ministers, MPs and other government officials will not participate in the function. Additionally, a prize-giving ceremony will not be held.

Five teams, namely Ayyanthole, Viyyur Centre, Sakthan, Punkunnam and Kanattukara, will arrive at the Swaraj ground by 4:30 PM and will continue until 7 PM on Sunday. Each group consists of 35 to 51 artists.