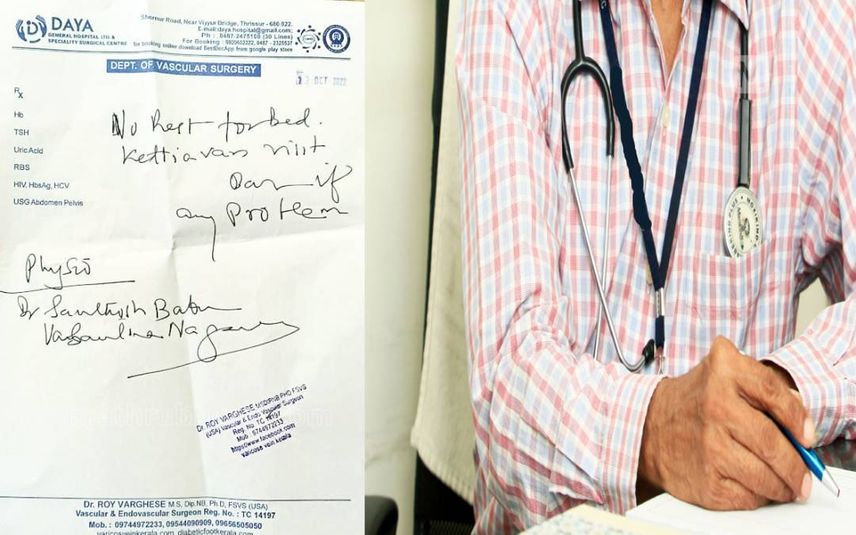 Guruvayur: In a bizarre incident, a modern medicine practitioner allegedly mocked a couple when they approached him to consult for leg pain. The doctor even wrote abusive comments in the prescription.

Mammiyoor natives Priya (44) and Anil Kumar approached Dr Roy Varghese of vascular surgery department of Daya hospital, Thrissur on Thursday. Priya, an employee of the primary health centre in Vadakkekad, has been suffering from led pain for the last two years.

The patient was asked to take an x-ray. When they returned with x-ray result, the doctor reportedly asked them if they understood anything from it. He asked the couple to consult another doctor since her leg was swollen.

When Anil Kumar said his wife was unable to walk and requested him to prescribe some medicine for temporary relief, Dr Varghese allegedly mocked them.

The couple were humiliated in the medical store when the staff started laughing at them after reading the prescription. “No rest for bed. Kettiavan (husband) visit bar if any problem, (sic)” this was the first sentence in the prescription. Below, the doctor recommended meeting a general physician.

Anil Kumar said he will complain to the chief minister against the doctor. Meanwhile, Daya hospital sacked the doctor.