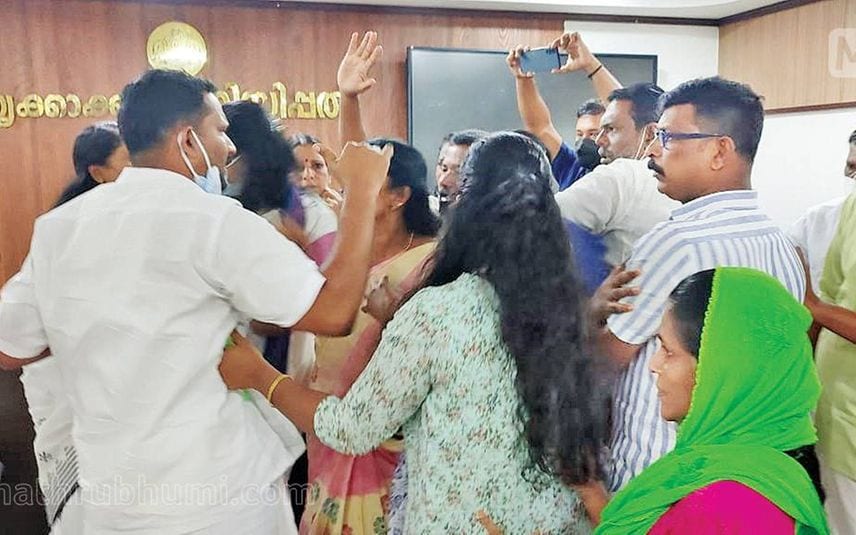 Kochi: Two councillors of Thrikkakara Municipality have been arrested over the violent clash that broke out between ruling and opposition party members during council meet. CPI councillor MJ Dixon and INC councillor CC Viju were arrested.

The arrest comes after a slew of complaints filed by both the ruling UDF and the opposition LDF. As the complaints were filed alleging insult to woman’s modesty and other charges, more people are likely to be arrested.

The clash erupted during the council meeting, when the chairperson demanded that the municipality should bear the expense of repairing a lock. When the opposition rejected this demand, a scuffle ensued between the two groups leading to several council members getting injured. Nearly, half a dozen councillors and chairperson Ajitha Thankappan were hospitalized.

Meanwhile, the political slugfest between UDF and LDF fraction continues with allegations and counter-allegations. Chairperson Ajitha claimed that she is being targeted for her caste and the situation is such that governing has become difficult.

“The opposition councillors came to the dais. They thrashed and showered me with abusive words. Acts like this will be countered legally and politically,” she said.

Meanwhile, the councillors of opposition party alleged that the council meeting is not happening in a proper manner and no debates are conducted over topics before taking decisions. According to them, chairperson is behaving in an authoritarian manner.

Last day 76 agendas were passed without any debate or discussion, they alleged. “This cannot be permitted,” pointed out PC Manoop, one among the opposition councillors.