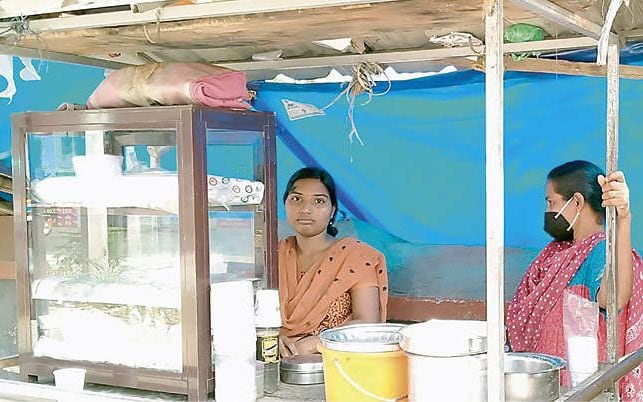 Sariga and her mother in the shop

Thiruvananthapuram: Sariga Suresh of Vakkam in Thiruvananthapuram has too many challenges before her but she will not step back from her pursuit towards IAS dream. After the unexpected death of her father, she took ‘thattukadu’ (roadside eatery) business. Along with that she is finding time to chase her academic interests.

She holds a second rank in MA Sanskrit program offered under Kerala University. Since childhood she was a very studious student. IAS is her ambition and she is very determined about that. During the last Onam season, Sariga’s father Suresh collapsed and passed away. The unexpected death of the 61-year-old man who earned livelihood from thattukada shattered the family. Sariga, her mother and married sister were in a perplexing situation. But Sariga comforted the family and was ready to take up her father’s occupation. She operated the thattukada in a staggered manner along with her mother and hoped for a revival.

In spite of the challenging situation, Sariga now has enrolled for PhD. The preparation for IAS is happening along with that. She hopes her small business and studies will go in a synchronised manner.