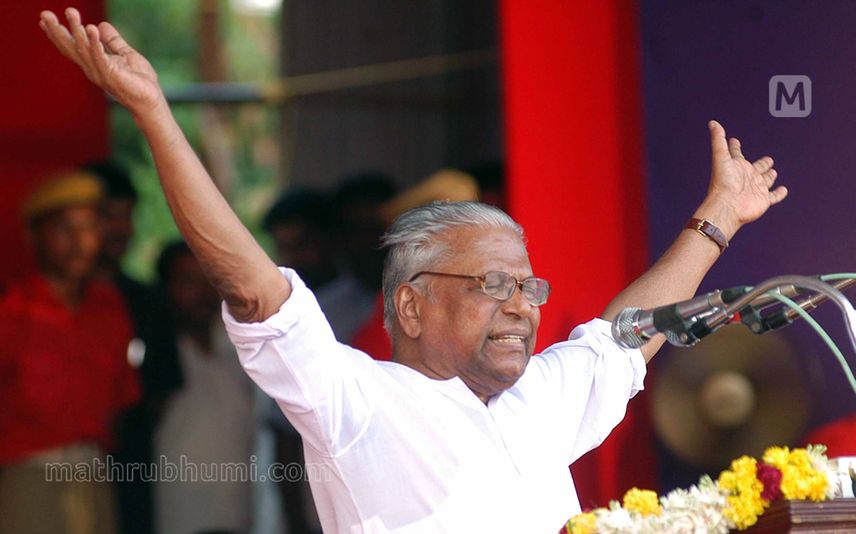 Velikkakathu Sankaran Achuthanandan or simply 'VS', the political stalwart of Kerala, turns 100 on Thursday. Away from the public eye, the former Chief Minister of Kerala will celebrate his birthday with family members at his residence in Thiruvananthapuram. Despite his age-related ailments, he continues as an omnipresent figure in the heart of people and a familiar face for Malayalis born in the last five decades.

Interestingly, he became the Chief Minister of Kerala at a record age of 84, more than 67 years after he joined the communist party as a member. For him, age is just a number, and when he says that, one could see the everlasting fire in his eyes and his willingness to offer more to the public as their leader.

The Alappuzha-born leader is the only living Keralite among the 32 members who left the CPI National Council in 1964 to form the CPM.

VS Achuthanandan, born on October 20, 1923, to Sankaran and Accamma at Punnapra in Alappuzha, started his political life by organising the agricultural workers in Kuttanadu. It was the key reason why he had an unflinching concern for the welfare of farmers. When the farmers' welfare board was established in the year 1990, he took a firm decision to collect only a meagre amount as 'amshadayam' (profit contribution). Following this, Rs 2 per month was fixed as the profit contribution by farmers. His staunch support for farmers was visible throughout his career.

He was very active in trade unions during the initial years of his career. In the year 1940, he became a member of the Communist Party of India (CPI). During his political career, he was imprisoned for five years and six months.

He was an undeniable factor in the growth of CPM and it was evident in so many instances. Even the Pinarayi Vijayan government owes much to the senior leader in uprooting UDF votes across the state through his charismatic leadership. He was sworn in as the chief minister at the age of 82 and he became the oldest chief minister of Kerala. He was removed from PB and the central committee in 2009 for his stand against Chief Minister Pinarayi Vijayan in the Lavalin case.

In 2011, there was an upheaval after he was denied a seat in the polls. Protests erupted across the state and social media were flooded with posters demanding seats for him. With no other option, the party gave him a seat again and he won by a margin of 25,000 votes. However, UDF regained power by a narrow margin of 68-72.

In 2016, LDF secured a huge win with 91 seats. VS was 92 at that time and he actively campaigned for the party with much enthusiasm. Being the most recognisable leader in the front, VS was considered for the chief minister's post. He won from Malampuzha against C Krishnakumar with a margin of 27,142 votes. However, the scenes following it were not pleasing for him as unexpectedly Pinarayi Vijayan took the helm of the state.

With sheer determination and utmost willpower, he steered the Communist party in Kerala towards progress. His unwavering faith in the party has not allowed him to compromise in any instance.

The demolition drive in Munnar, which recovered acres of illegally occupied land, the demolition drive in Kochi, the anti-piracy drive, operation against the lottery mafia all were the ideal examples to showcase him as a strong and determined leader. It's now autumn for the patriarch. The legendary figure now leads a peaceful, retired life with family in the memory of the turbulent, revolutionary days.

Autumn of the Patriarch: VS Achuthanandan turns 98