`Thanks to almighty': Franco Mulakkal reacts after acquittal 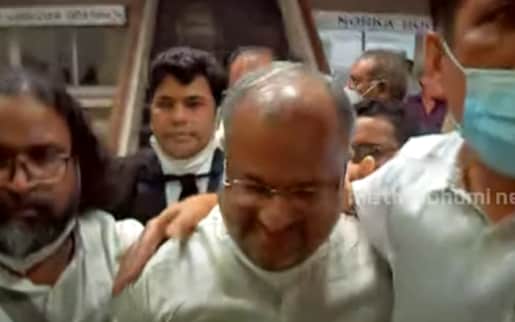 Kottayam: “Thanks to almighty,” was the reaction of Bishop Franco Mulakkal after he was acquitted by the Kottayam sessions court on Friday in relation to the nun sexual abuse case. While leaving the court after the verdict along with his brother and relatives, the Bishop had only just a few words to share with the media.

The verdict came after 105 days of trial and District court judge G Gopakumar said that he has been let free for want of evidence. He was acquitted of all seven charges booked against him.

Bishop Franco was brought to the court by 9.30 in the morning. He arrived with his brother and brother-in-law and entered the court through the back door.

The court was surrounded by police personnel deployed under the guidance of Kottayam DySP. Bomb and dog squads inspected the courtroom. Barricades were positioned on the court’s compound.

Mulakkal was arrested on September 21, 2018, on rape charges. In her complaint to the police in June 2018, the nun, who belonged to the Missionaries of Jesus congregation, had alleged that she was subjected to sexual abuse by Franco, then Bishop of the Jalandhar diocese of Roman Catholic Church.