Parayi Babu, an ex-BJP-RSS activist, regularly took part in numerous CPM programmes after joining the party. He is also an accused in pelting stones at former Chief Minister Oommen Chandy. 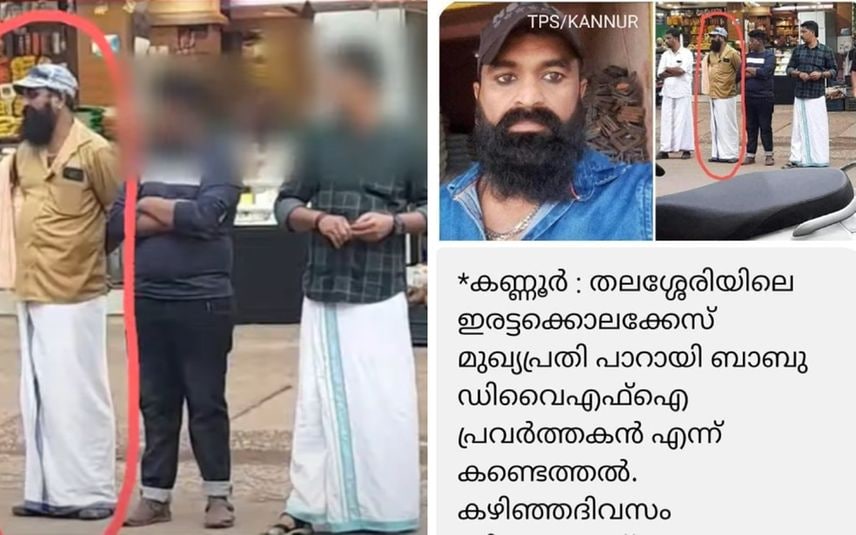 Thalassery: In a new turn of events, pictures of the key accused in the Thalassery twin murder case Parayi Babu, participating in an anti-drugs programme organised by the DYFI has surfaced on social media. Following this, the Congress alleged that the accused are CPM activists.

Parayi Babu, an ex-BJP-RSS activist, regularly took part in numerous CPM programmes after joining the party. He is also an accused in pelting stones at former Chief Minister Oommen Chandy.

It is in the backdrop of the recent pictures that the Congress and BJP have accused Babu of having close ties with the CPM.

However, city police commissioner Ajith Kumar did not confirm that rivalry between drug mafia gangs was the reason behind the murders. Apparently, the police are yet to clarify the assumption as disputes over vehicle-money transactions also existed between the accused and the victims.

Although another accused Jackson’s links with drug sales have been confirmed, the police have not accepted the CPM’s claim that the murders were committed for questioning the drug sale in the locality.

Clashes between the gangs have taken place earlier as well. Attempts were made to resolve the disputes but to no avail.

Meanwhile, CPM state secretary MV Govindan on Thursday said that strong action will be taken against drug mafia regardless of their political ties.

CPM activists Khalid (52), a fisherman, and his brother-in-law Shameer (40) were killed allegedly for questioning the sale of psychotropic drugs in their locality.