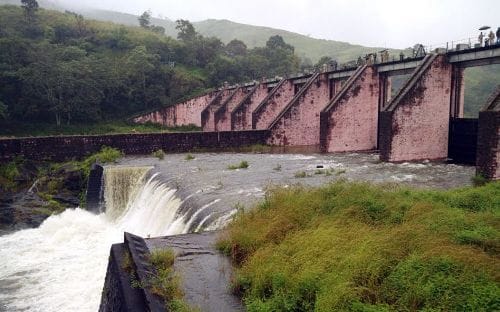 Two shutters of Mullaperiyar dam opened following a rise in its water level, in Idukki on Friday | Photo: ANI

Idukki: Tamil Nadu on Friday night has raised the third shutter of the spillway of Mullaperiyar dam. An additional 275 cubic feet of water is being released through this shutter. With this, the total amount of water being let out has become 825 cubic feet.

Earlier today, two shutters of the dam were raised by 35 cm at around 7.30 am. The current level of water in the dam is 138.85 feet. Water will be discharged through the spillway until the the level reaches 138 feet. This is the third time the shutters of the dam is being opened within a span of seven years.

Minister for Land Revenue K Rajan told Mathrubhumi news that the state has taken all necessary measures and precautions have been implemented on account of the opening of the shutters. The surrounding areas are on high alert.

Minister of Water Resources Roshy Augustine stated that there is no cause for worry over the opening of the shutters.