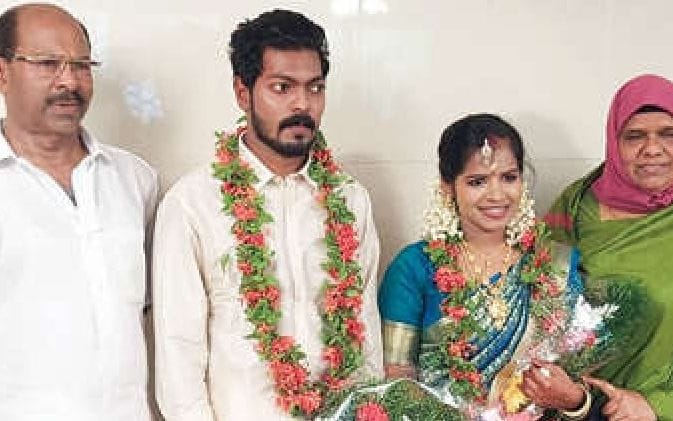 Kavitha and her groom pose for a pic with Razaq and wife Noorjahan at their wedding | Photo: Mathrubhumi

Triprayar: Tamil girl Kavitha is a member of Razaq’s family for the last 14 years. Without bothering about the state or religion, she was brought up by a Muslim family in Triprayar. When she attained marriageable age, her foster parents were happy to host her wedding.

Apart from gifting gold and dress for the wedding, Kavitha and his groom got a new house as gift from Puthiyaveetil Razaq and family.

Razaq was an Air Force officer. Kavitha reached his house at the age of 8. Razaq found the girl from the street and took her to his home. From then, Kavitha started to live as the fourth child of Razaq’s family which included his wife and three daughters.

Once in a year, her parents from Salem visit her. In the last 14 years, Kavitha visited her native place only two times.

Kavitha got easily adapted to Kerala lifestyle and became a part of Razaq’s family over the years. Hence, Razaq took the responsibility of conducting Kavitha’s marriage as her guardian.

He found a groom for Kavitha and conducted the marriage as per Hindu custom. Kavitha got married to Nattika native Sreejith, a photographer and employee at a private firm. He also owns a farm of ornamental fish. The marriage ceremony was conducted at Razaq’s own house.

He also constructed a house for Kavitha on 4 cent land close to his house. Razaq’s daughters gifted 12 sovereign gold to Kavitha.

Her parents and two sisters also arrived to take part in the wedding.