Keralites among evacuees from Afghanistan, breathe sigh of relief 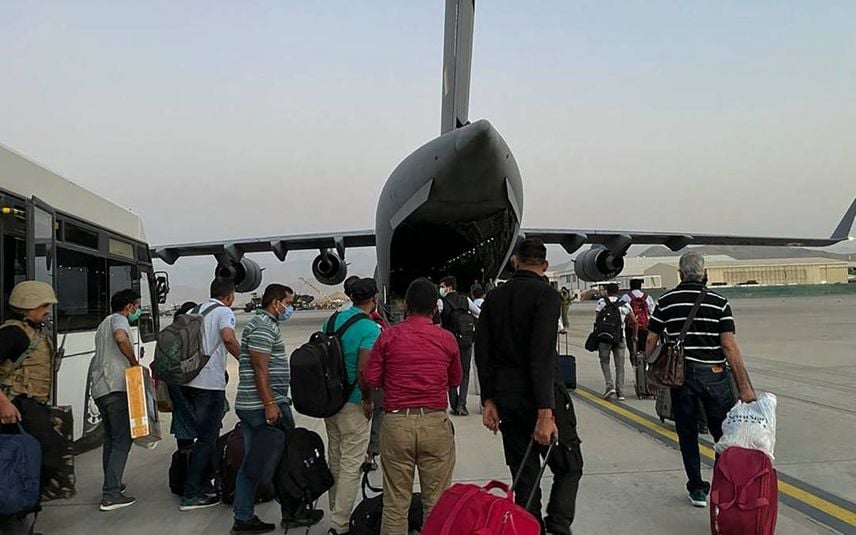 Indians trying to board the flight at Kabul airport | Photo: AFP

Thiruvananthapuram: Around 45 Keralites were among latest batch of Indians airlifted from Afghanistan and reaching New Delhi on Sunday and shared tales of the ordeals they had gone through.

A person from north Kerala who was in Afghanistan for the past few years told IANS, on the condition of anonymity, that: "It has been a nightmare and I don't know how to express it. There are several check-posts erected by Taliban and getting up to the airport was a herculean task and I thank the Government of India and the Government of Kerala for having helped all of us back to India. All the Keralites are back to the country."

Minister of State for External Affairs, V. Muraleedharan, told media persons that the government has brought in a group of Indians in which Keralites are also there. "According to our information, around 500 Indians are still stranded in various areas of Afghanistan and we will be airlifting them as well," he said.

Kerala Chief Minister Pinarayi Vijayan thanked the Centre and Prime Minister Narendra Modi for bringing the Keralites back to the country from Afghanistan.

Vijayan, in a tweet, called upon anyone who is still stranded back in Afghanistan to contact the NORKA Roots website or the helpline of the External Affairs Ministry which is working 24X7.

Former Indian diplomat Venu Rajamony told media that there is however no exact data on the number of Indians and Keralites working in Afghanistan as several people who reach that country from the UAE and other countries does not register with the embassy. However, he said that the Indian embassy has operational contacts with the Taliban as was evident by the evacuation.