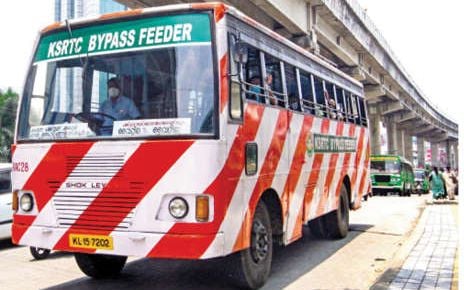 Kochi: The KSRTC bypass feeder services, which were introduced in Kochi as a solution to the travel woes of commuters living far from major routes in the city, are not getting returns worth operating. Among many other factors, the painting pattern is a matter that left the services with less number of takers.

The bus has slanted stripes of white and red colours. Many mistake it for KSRTC’s workshop vehicle. Commuters cannot be blamed for it as it apparently resembles it.

Facing aversion from commuters, the authorities concerned deliberated the matter. The plan is to hang boards in front of these buses displaying the message: Same charge as the ordinary bus. Though it cannot avert the confusion caused by the painting pattern, it is expected that there will be more takers.

To avoid losses, a bus in a day should get at least Rs 12,000 from its operation. Now the average daily collection is just around Rs 1,200.

In Ernakulam bus stand, there are five feeder service buses. They ply between 6 AM and 8 PM, through regions like Vyttila hub, Pallimukk, Menaka, Kaloor, Palarivattom, Pipe Line and Chakkaraparamb.

The routes are also an issue. Edappally, which has more commuters, is not among the routes in spite of public outcry.