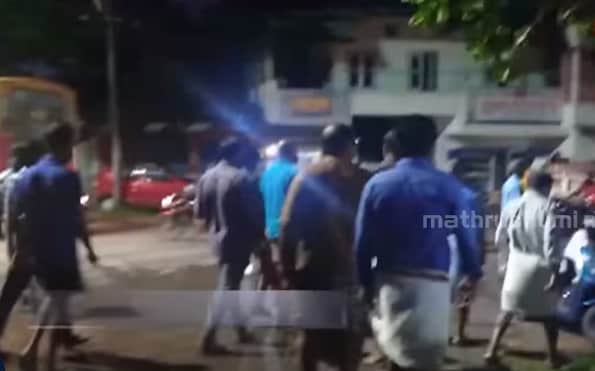 Kollam: Clashes erupted between SFI and BJP activists near SHM college at Kadakkal in Kollam have left four injured.

SFI district committee member Safar suffered a cut on arm and three injured BJP activists have been shifted to a hospital.

Building constructed for slaughter house in Kollam in abandoned state

Kasaragod: A 16-year-old girl died and 14 students were hospitalised due to food poisoning at Cheruvathoor here on Sunday. The deceased is identified as ..

At 57, Thrissur woman performs ‘Arangettam’ after her lone battle for daughter turned successful

Thrissur: At the age of 57, Rajarajeswari realised her dream with the satisfaction of achieving everything she aimed for. She performed her Bharathanattyam ..

Thiruvananthapuram: Senior Kerala politician P C George who was arrested by police on Sunday for his alleged controversial remarks against Muslims was ..

Thiruvananthapuram: Former MLA PC George, who was arrested in relation to his controversial speech at Ananthapuri Hindu Mahasabha ‘ Mahasammelan', obtained ..

Thiruvananthapuram: Shone George, son of PC George, stated that the case against his father over hate speech will be legally dealt with. The statement ..

Senior Kerala politician P C George was taken into custody by police on Sunday for his alleged controversial remarks against Muslims.Police said cops from ..