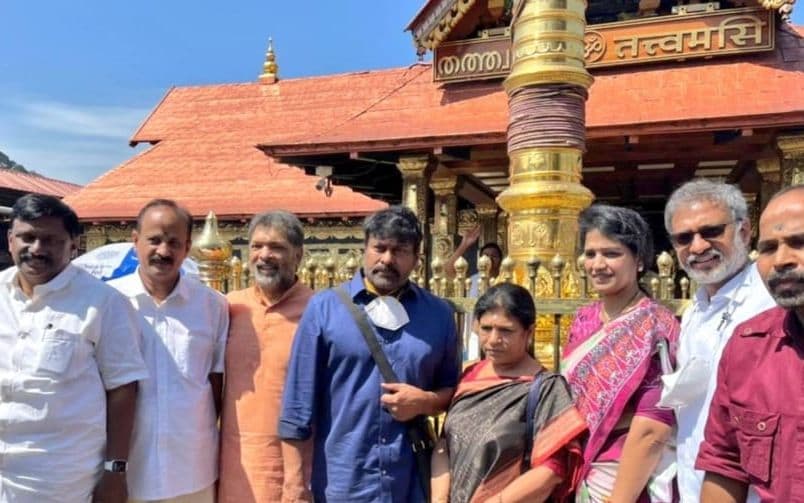 Actor Chiranjeevi and others at Sabarimala. Photo: Twitter/KChiruTweets

Thiruvananthapuram: Travancore Devaswom Board president reacted to the controversy over Telugu actor Chiranjeevi's visit to Sabarimala. It was alleged that the actor was accompanied by a young woman during his visit to the shrine. Rubbishing these allegations, Travancore Devaswom Board president K Ananthagopan told Mathrubhumi News that a young woman never visited the shrine along with the actor.

"Wicked people behind are behind this campaign. The woman who accompanied the actor is Indumathi Chukkapalli who is 56 years old," clarified the president.

On Monday the social media was abuzz that temple rules were violated as a young woman had entered the temple located on top of a hillock.

TDB President said it is unfortunate that a smear campaign is being run on social media alleging that temple rules were violated.

Indumathi is married to Suresh Chukkapalli, Chairman of the Phoenix Group headquartered in Hyderabad. Both visited along with Chiranjeev, he said.

“Her Aadhar card shows she is born in 1966 and there is no need for controversy over her visit,” he added.

He also pointed out that some people are defaming a pilgrimage centre like Sabarimala by false campaigns after guessing the age of the people.

“Their objective is to create misconceptions among Ayaappa devotees and put people in anguish,” he slammed.

Such tendencies will not be entertained.Police department is likely to initiate a probe into the incident, he added.