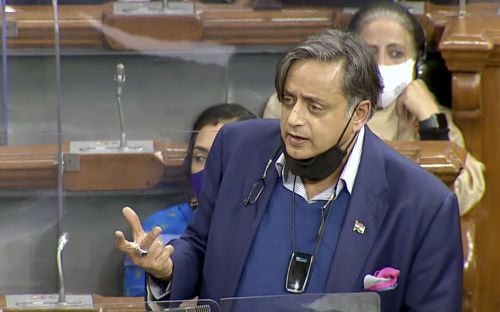 New Delhi: MP Shashi Tharoor on Monday raised the issue of 'dealy' in installing the proposed automatic weather stations in Kerala, in the Lok Sabha during the Zero Hour.

"I wish to draw the attention of the Honourable Minister of Earth Sciences to the lack of IMD's preparedness for weather forecast and its recent failure to issue red alerts for heavy rain in a timely manner in Kerala.

"Having witnessed two consecutive floods in 2018 and 2019, Kerala re-experienced excessive rainfall last year, leading to great loss of life and property. The IMD, however, failed to issue a red alert despite extreme weather conditions between 12th October and 16th October," he said.

He said this "prevented the State Government from taking appropriate action."

Though "Kerala requires 256 weather stations as per the BIS standards, there are only 21 Automatic Weather Stations (AWS) of which only 15 are functional in the State," he said.

Tharoor demanded to "expedite the setting up of 100 Automatic Weather Stations in Kerala as promised by IMD in the aftermath of the 2018 floods."