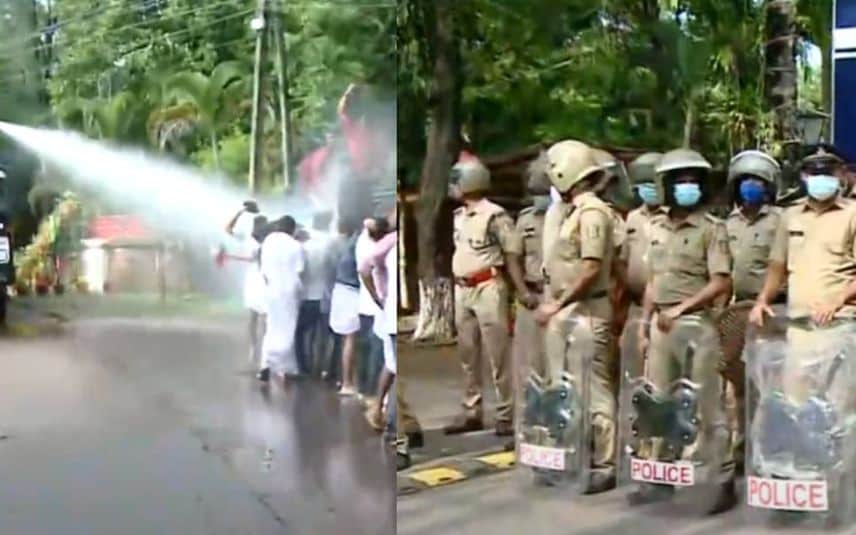 Kannur: Congress workers were arrested in Kannur on Monday for organising protests demanding the resignation of chief minister Pinarayi Vijayan, who is camped in the Government Guest House here. The police used water cannons on Congress workers gathered outside the Guest House with black flags.

Police have beefed up the security of the chief minister ahead of his visit to Kannur to attend various public events. CM is in Kannur to inaugurate the 'International Centre for Leadership Studies' under the Kerala Institute of Local Administration (KILA), lay the foundation stone for the 'Institute of Public Policy and Leadership College' and hostel and inaugurate a library council meeting of the Kerala State Library Council.

More than 500 personnel are deployed for the safety of the CM.

Meanwhile, the police have intensified security measures on the route of the CM's envoy. Police are yet to release details of the route to be used by the CM's envoy to attend the events. Additionally, 700 policemen are deployed in various areas as a security measure. The traffic restrictions are also imposed on parts of the Taliparamba town area.

Earlier, the police intelligence wing advised CM to avoid attending public events due to escalations in protest events. Muslim League representatives in the district said that severe security restrictions in the area had caused hardship for the people. The traffic regulations ahead of CM's visit yielded much trouble for students and daily commuters, they said.

The opposition parties have been demanding the resignation of chief minister Pinarayi Vijayan over the allegation of gold smuggling accused Swapna Suresh that CM has smuggled gold and dollars during his foreign visits in his previous term.