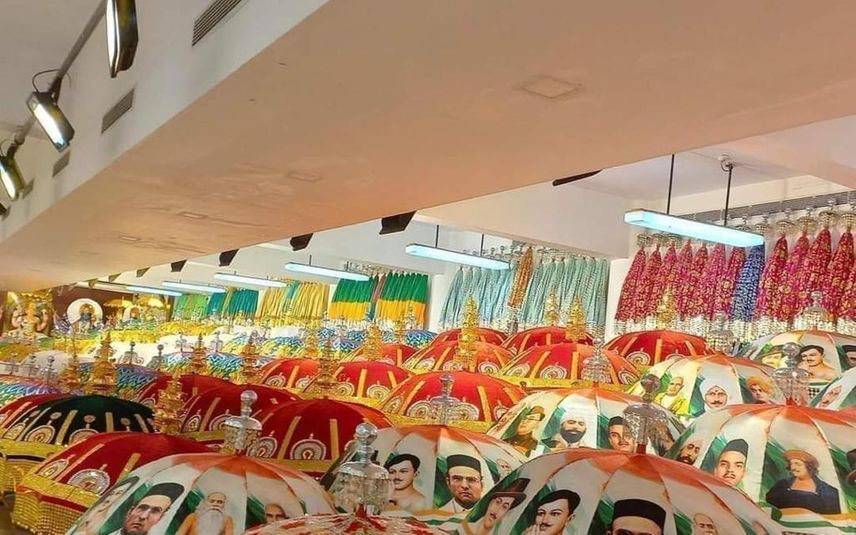 Thrissur : The Paramekkavu Devaswom, an important temple group that is among the organisers of the renowned Thrissur Pooram, on Sunday ran into a controversy after its authorities decided to feature Hindutva icon V D Savarkar in an ornate umbrella as part of the upcoming festivities.

However, the temple authorities reportedly decided to withdraw the umbrella from display after leaders of the Congress and the CPI(M) raised an objection.

The umbrellas, featuring various renaissance and freedom movement leaders including Mahatma Gandhi, Bhagat Singh and other prominent leaders from Kerala, also have an image of Savarkar.

"We will not do anything that will affect the communal harmony or that may hurt the Pooram or affect the religious harmony of the festival. We do not want to politicise the Thrissur Pooram which is an international event. Pooram is above politics," Paramekkavu Devaswom Secretary Rajesh told PTI.

However, he refused to comment on whether the board has decided to withdraw the umbrella or not but reiterated that the temple authorities do not want any controversies around the Pooram.

The umbrellas are part of the "chamayam" of the Paramaekkavu Devaswom -- an exhibition inaugurated by BJP leader and actor Suresh Gopi during the temple festival.

Congress leader Padmaja Venugopal said in a Facebook post that the Sangh Parivar agenda has been "forced into the Pooram" by including the image of Savarkar along with other prominent leaders like Mahatma Gandhi and Bhagat Singh.

"It's the Kerala government which has given permission to include Savarkar, who betrayed the freedom struggle, to be included along with Mahatma Gandhi, Swami Vivekananda, Bhagath Singh, renaissance leaders like Mannath Padmanabhan and Chattambi Swamikal... It's a shame that the Sangh Parivar agenda was implemented in a state which is ruled by the Left government," Padmaja, who is also the daughter of former chief minister K Karunakaran, said in her post.

Sources said the images were selected based on the list of freedom fighters released by the Union government as part of the 'Azadi ka Amrit Mahotsav' celebrations.

The BJP and the Sangh Parivar have not reacted to the controversy yet. PTI