Sabarimala temple opens; 15,000 can have darshan 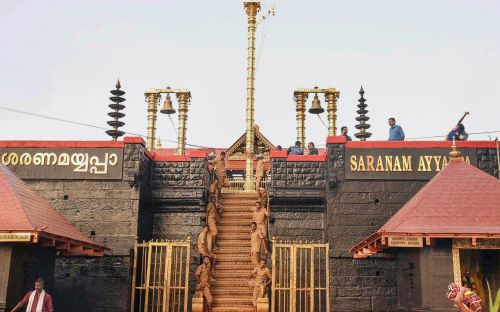 Sabarimala: The Sabarimala Ayyappa temple opened for the 10-day 'Painkuni Uthram' festival and for the monthly pooja of Meenam (Malayalam month).

In the presence of Thantri Mahesh Mohanaru, chief priest N Parameswaran Namboothiri opened the sanctum sanctorum and lit the lamp on Tuesday. By night, the ‘kodikura’ brought from Kollam's Sakthikulangara Sree Dharma Sastha Temple was placed before the deity.

The flag-hoisting ceremony will happen between 10: AM and 11:30 AM on Wednesday. Ceremonies including ‘sreebootha bali’, ‘uthsava bali’ and ‘velakk azhunnalath’ will be conducted as usual.

‘Pallivetta’ will be on March 17. ‘Aarattu’ will happen on March 18 morning at Pamba river and in the meantime the devotees can place the ‘paras’ (a special form of prayer according to Hindu belief system).

The devotees were allowed from Wednesday morning. In a day, 15,000 devotees will be allowed to enter the temple. Only those who have booked through the virtual queue system will be allowed. The devotees can also avail spot booking facility provided at Nilakkal. Travancore Devaswom Board informed that Neelimala route closed after Mandala season will open during the festival days.