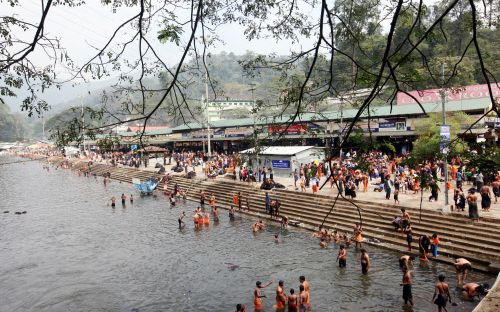 Pathanamthitta: In view of heavy rains in Kerala and the orange alert declared in the district on August 2 and 3, pilgrims reaching Sabarimala for the Niraputhari festival would not be allowed to bathe in the Pampa river this time.

The direction has been issued by the District Collector of Pathanamthitta, Dr Divya S Iyer, who also advised the pilgrims to be extremely careful while travelling to the hilltop shrine during the prevailing adverse weather conditions, a State government release said.

The decision was taken in a meeting held by the Collector to review the arrangements for the Niraputhari festival, which marks the beginning of the harvest season, in view of the Orange alert in the district and State Disaster Management Authority's (SDMA) restriction on travel to hilly regions at night, the release said.

The Collector also directed that since the SDMA has prohibited people from entering rivers, pilgrims would not be allowed to bathe in the Pampa and that devotees would only be allowed to pass through the Swami Ayyappan road, the release said.

She also said Sabarimala will be opened on August 3 for the festival and there will be no disruption for the ceremonies.