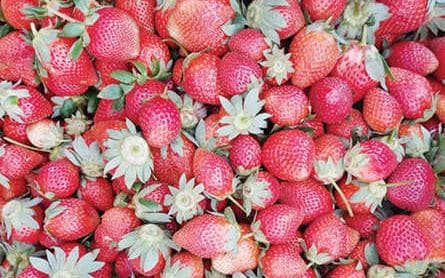 Strawberries put up for sale in Munnar

Munnar: Strawberry prices are skyrocketing in this ongoing season of the fruit and has breached records of the previous year. The fruit is now sold at Rs 600/kg.

In the previous years, the rates were Rs 300/kg and Rs 200/kg. The cultivators have attributed prolonged rains to the rise in prices as many were not able to cultivate the fruit.

Notably, Horticorp’s three-acre land in Munnar’s Graham’s Land Road is the site where most of the strawberry cultivation is present. Hybrid varieties like Sweet Charlie and Camarosa, known for their taste and size, are being cultivated there. The seeds of these varieties were provided at subsidised rates to the cultivators by the agricultural department.

Travellers can visit the place, pluck the fruit and take them by paying according to their weight. Interestingly, by now, there are many takers for the fruit. The daily sales are around 40 to 50 kilograms. Apart from that, value-added products like jam and squash are sold through the sales centre.

The harvest in the Vattavada region will start from mid of March.