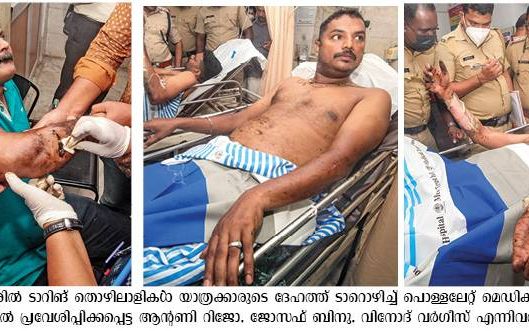 Chilavannur natives Chiramel Vinod Varghese (40), Joseph Vinu (36) and Antony Jijo (40) suffered burn injuries in the attack. These passengers, who are relatives, entered into an argument with the road workers over traffic regulation on Chilavannur road. It is learnt that the passengers questioned the workers for carrying out work without placing sign board. Following the heated arguments, Krishnappan poured boiling tar on passengers.

Vinod who was doused with tar suffered serious burns on both hands. Joseph Vinu sustained burns on one hand and stomach. Krishnappan who attacked the passengers also suffered burns. Police arrested him from Ernakulam general hospital.

The passengers informed that the worker attacked them without any provocation. They are undergoing treatment at Medical Trust Hospital.