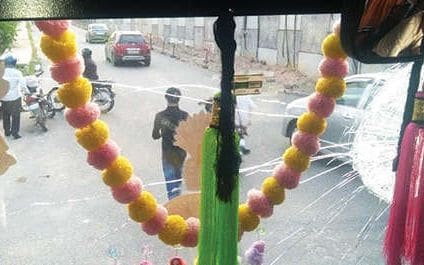 The bus mirror after the attack

Mysuru: In a road rage incident, miscreants damaged a KSRTC-SWIFT Bengaluru-Mysuru bus passing through Yeliyur circle near Karnataka’s Mandya and attacked the driver. The attack was unleashed apparently over not giving way to their vehicles.

The incident happened around 6:30 PM on Monday when a car and two bikes intercepted the bus and created ruckus.

The miscreants dragged the driver Sanoop out and thrashed him. They pelted stones at the bus. The passengers did not suffer any injuries and they were send off in another bus. A complaint has been lodged with police.

The damaged bus was taken to police station. It is learnt that police have identified the miscreants and they will be arrested soon.

DPR for TVM, Kozhikode metros to be ready in 9 months: Kochi metro MD