Stranger who presented gift to Babu finally shows up 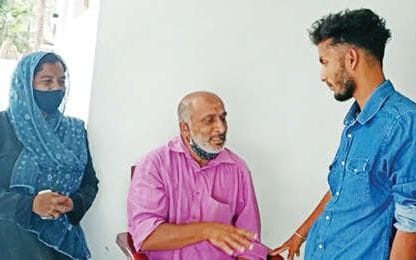 Palakkad: The ‘stranger’ who fondly gifted a shirt and dhoti for Babu at the district hospital appeared before the family. Vijayan from Kodunthirapully, who is a priest, visited Babu’s house on Saturday morning. He offered his blessings to Babu and conveyed how earnestly he had prayed for the success of the rescue mission.

Vijayan had visited Babu when the latter was at the district hospital after the rescue mission led by the Indian army saved his life. But Vijayan could not see Babu as he was denied permission. Later he handed over a shirt, dhoti and Rs 100 to Babu’s mother Rasheeda and left the hospital. Rasheeda had informed the media of the incident on the same day and said how valuable the gift is for the family.

Babu was overjoyed when he received the phone call from Minister of Forests AK Saseendran to enquire about his health condition. The NCP leaders and workers who reached Babu’s house on Saturday dialled the minister and Babu had a conversation with Saseendran for almost five minutes. Before ending the call, the minister advised him not o proceed with such endeavours without obtaining permission from the concerned authorities.

Army assessing women officers for promotion, to be considered for command assignments