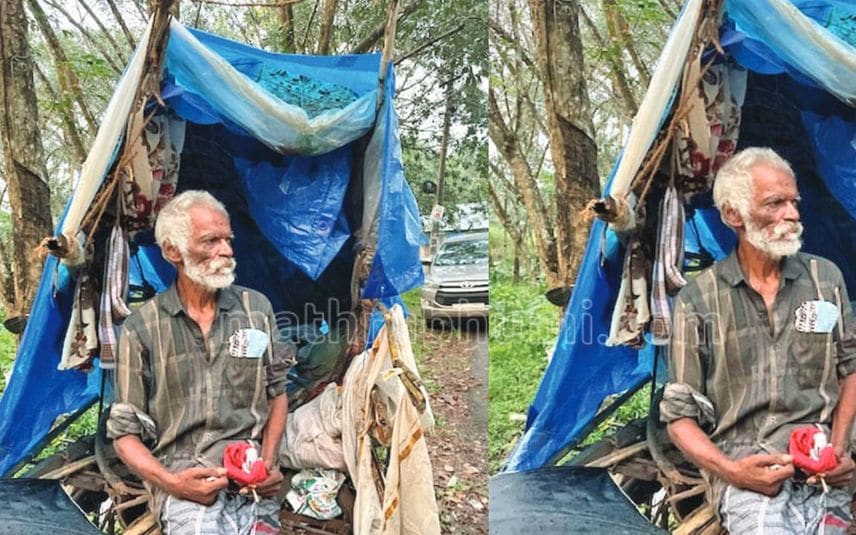 Thiruvananthapuram: Kattakada native Soman is living as a refugee in his own homeland. When the government is boasting about the housing projects for the homeless, this aged man is forced to set up a tent by tying two bicycles. His tent is situated in a space between rubber trees by the roadside.

As his father was a bullock cart driver, Soman accompanied his father to work at a very young age. He was the last one among the four sons. When he was in the fourth standard, he was forced to quit his studies due to the financial constraints of the family. Later, Soman started accompanying people going to the Kottur forest for collecting firewood.

For a long time, Soman engaged in collecting firewood and distributed it to hotels and other places. He got 10 cents of land during the partition of his ancestral property.

Following the death of his parents, Soman who is unmarried became left alone in life. To find a livelihood, he sold his property for purchasing a farmland. But he didn't turn successful in this mission. The money he got from selling the land also ran out. An old bicycle which he used for carrying firewood is the only thing left in his possession.

He continues to go to the forest early in the morning to collect firewood and takes a ride on his bicycle in search of customers to sell the wood.

His deteriorating health due to heavy work is holding him back from travelling long on the bicycle.