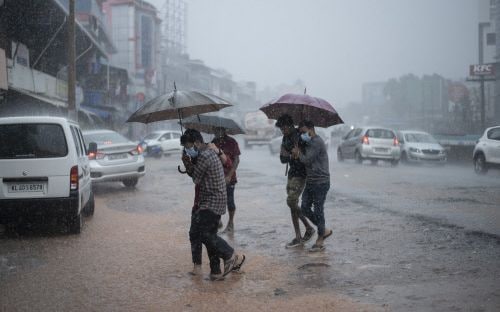 Thiruvananthapuram: Rains continued to lash many parts of Kerala on Wednesday leading to rise in water level in various rivers, forcing authorities to open shutters of Malampuzha dam in Palakkad district to discharge excess water in the reservoir.

India Meteorological Department (IMD) has predicted rain or thundershower at most places in Kerala and Lakshadweep till September 3 due to the cyclonic circulation over interior Tamil Nadu and neighbourhood to west Vidarbha across Telangana, Rayalaseema.

The weatherman has sounded yellow alerts in all 14 districts, predicting rains in most places in the southern state.

Hundreds of residents in central Kerala districts were evacuated owing to rain.

The Pathanamthitta district administration has declared holiday for schools, which were being temporarily converted into relief camps.

Authorities have sounded alert to people living on the banks of river Bharathapuzha as the shutters of Malampuzha dam will be opened to release excess water in the reservoir. PTI