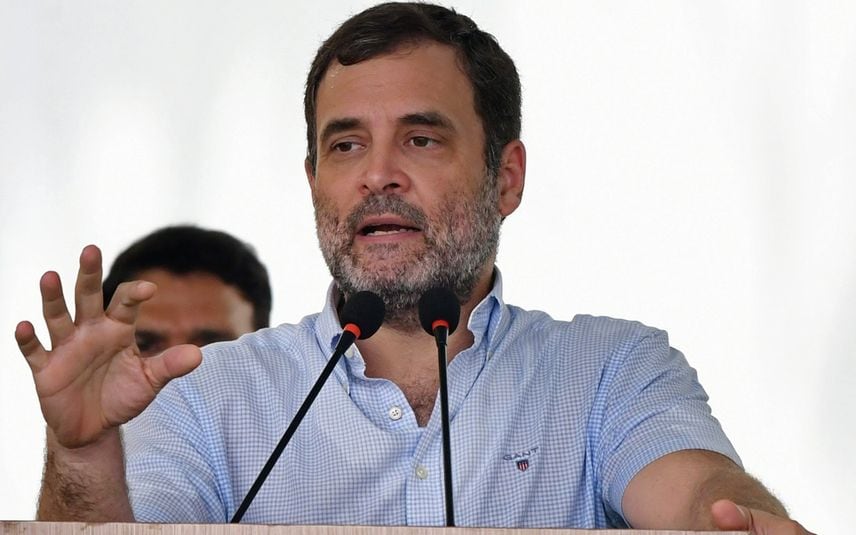 Wayanad: A day after the LDF government in Kerala decided to move the Supreme Court seeking modifications in its recent verdict on eco-sensitive zones, Congress leader Rahul Gandhi on Friday urged Chief Minister Pinarayi Vijayan to "stop creating confusion" over the issue.

Gandhi warned he would resist any of the state government's attempts to include the inhabited areas in the ESZ.

Addressing a massive rally here against the implementation of the apex court verdict to create a one-kilometre ESZ around all wildlife sanctuaries and national parks, the Wayanad MP said he was requesting the Vijayan government to resolve the issue that had been created by themselves.

Gandhi said when he had urged the Union Environment Ministry to consider the concerns of the people of high range Wayand, which would be largely affected by its implementation, he was informed that the zone was demarcated as per the proposal sent by the LDF government in 2019.

Terming the ESZ issue as a "serious" one for the people of his constituency, the Lok Sabha member said he had written to Vijayan soon after the top court pronounced the verdict and urged him to do all necessary things to alleviate the people's concerns but he had been given no assurance on any concrete steps being taken by the state government.

"I also wrote to Prime Minister Narendra Modi detailing the concerns of the local community in Wayanad," he said.

Stating that there is absolute clarity in the Congress-led UDF about the ESZ issue, the leader said "we don't want a buffer zone which includes inhabited areas".

"So that it is crystal clear. UDF does not want inhabited areas to be included in the eco-sensitive zone areas. And this has been our position since the beginning. So, the LDF and the Chief Minister should stop spreading confusion," Gandhi said.

Referring to the recent attack unleashed by the SFI activists against his office here over the buffer zone issue, the Congress leader said breaking his office does not make any difference and the ball is in the court of the Chief Minister.

Saying that there was no need for the people of his constituency to suffer due to the wrong policies of the Left government, he said it was an issue created by the Vijayan government and it should be resolved by them.

If the LDF government proceeds with the eco-sensitive zones, including the inhabited areas, the UDF would fight them every inch and resist the move non-violently, he said.

"We are not going to allow the inhabited areas to be part of the eco-sensitive zones. And the CM should be very clear that it is not just the Congress or the UDF but the people of Wayanad are against this... I know the people here...they are not scared of any threat or violence," he said.

Just like the three contentious farm laws brought by the Modi government were repealed, the implementation of the eco-sensitive zones including inhabited areas would also be stopped, Gandhi added.

However, the Chief Minister's Office (CMO) issued a statement later on Friday evening saying that Gandhi's charge that he had not received any assurance on the ESZ issue was wrong.

Vijayan had already sent a reply to Gandhi on June 23 for his letter in which the CM had given all assurances to resolve the issue, it said.

A high-level meeting chaired by Chief Minister Vijayan on Thursday decided to move the Supreme Court seeking to modify its recent verdict on ESZs.

The Chief Minister also directed the Advocate General to look into possibilities of bringing in legislation in the House to address the concerns of the people living in such areas.

The top court had, on June 3, pronounced the verdict to create a one-km eco-sensitive zone (ESZ) around all wildlife sanctuaries and national parks, which is generally considered to affect normal life of people living in the high range areas of the southern state for decades.

The apex court decision has triggered intense protests in high ranges of the state. PTI

Don't hold grudge towards those who attacked my office, says Rahul Gandhi during Wayanad visit