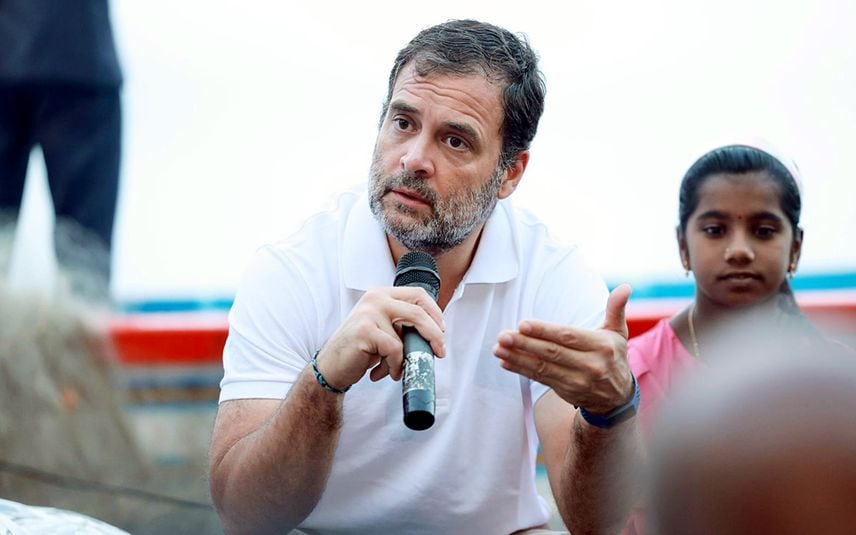 Malappuram: Congress leader Rahul Gandhi, who concluded his Kerala leg of the 'Bharat Jodo Yatra' has said he was experiencing knee problems during the foot march, but he was distracted from the pain when members of the public approached him and discussed various issues as the journey progressed.

Gandhi revealed this during his candid conversation with Congress leaders of the southern state on Wednesday in Wandoor in Malappuram district. The video of the conversation was released by the Kerala Pradesh Congress Committee on Thursday.

"I am having knee problem while I am walking. When I am walking, sometimes I am getting quite bad pain. And I have noticed whenever I am finding that difficulty, somebody is coming doing something or telling me something that is removing the difficulty," Gandhi said while sharing his yatra experiences in Kerala with the party leaders in the state. The Congress leader, who left Kerala after 22 days of yatra, said somebody comes and helps him in his most difficult times. Gandhi said on Wednesday he was having a "really tough time," but suddenly a girl came up to him and gave a letter, which read, "With hardship, there has to be ease".

"So suddenly I was thinking hardship, hardship, hardship, she gave me the letter and it is written hardship has to be eased out. ...I always found that every time I am having trouble somebody from the public or somebody from here (Congress leaders) is coming and pulling me out of the trouble", he said. According to him, women in Kerala are not insecure and they are quite confident and they have quite a powerful role in society. "Women are quite confident, aware---they are not insecure. They have quite a powerful role in society, I felt", Gandhi told Kerala leaders.

The Wayanad MP, who dedicates a significant amount of time to interact with a cross section of society during the yatra, said during his walk he had studied the issues being faced by the people of Kerala. "I noticed that if you go in towns, mostly you will find local businesses--all these smaller, medium businesses, they are having problems", he said. He said the state's agri sector is also not in a good shape. Gandhi said he has realised that the environment is central to politics in the southern state because of the small land area and a large population. "Kerala Congress is in safe hands", Gandhi said and urged the leadership to bring more women into the senior level of the party.

He also urged the state leadership to think about how the youngsters, tribals and dalits can be attracted to the party. During the conversation, Gandhi also expressed happiness for their efforts that made the yatra a 'success.' "Together we should also thank the people of Kerala who have made it possible and successful", Gandhi told his party colleagues in Kerala. Congress leaders from Kerala including AICC general secretary K C Venugopal, KPCC chief K Sudhakaran, Leader of Opposition in the state Assembly V D Satheesan and other senior leaders including Ramesh Chennithala, K Muraleedharan and MM Hassan also participated in the conversation. The 3,570 km and 150-day-long foot march started from Kanyakumari in Tamil Nadu on September 7 and will conclude in Jammu and Kashmir.